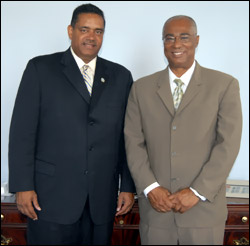 On a visit to St. Thomas, US Virgin Islands from April 26 to 29th, 2008, Premier of Nevis, the Hon. Joseph W. Parry, who was a guest of the Governor John P. deJongh, Jr. of the United States Virgin Islands, excited a large gathering at the Governor’s Mansion, when he spoke of a united Caribbean and the harmonization of the region’s resources to effectively compete in the global environment.

Premier Parry said that the government and people of Nevis are very excited at the prospect of having geo-thermal energy. He said that the resource utilized the heat below the earth’s surface to produce power and it was of even greater importance in the face of rising oil prices on the world market, hence the urgent need to seek alternative sources of energy.

“We have been told that Nevis has the potential to hold 900 mega watts of power beneath its surface,” said Premier Parry and he added that, “the Government of Nevis has therefore given a license to a company called West Indies Power Limited to explore for this geo-thermal. I am told it is no longer if, but when we can produce power from this geo-thermal energy.

“Most of the islands in the region have now turned their eyes to Nevis.  Islands such as St. Kitts, Saba, Anguilla, British Virgin Islands and the US Virgin Islands are all interested in this geo-thermal energy supply. With this renewable source of energy there would be no longer this great dependency on fossil fuel. More important, is the great reduction in the cost of energy it will have,” Premier Parry said.

He also explained that once West Indies Power Limited harnessed this important alternative source of energy, Nevis would be in a position to export low cost energy to other islands of the Caribbean.

The Nevis Island Administration has received assistance from the Organization of American States (OAS), Germany and Caribbean Community (CariCom) in drafting legislation to ensure that Nevis gets the best returns from this resource.

The Premier also indicated that he has had several discussions with leaders and Governors in the region about the rising cost of living. “It is important that we learn from each other and make a collaborated effort to bring the cost of living down.”

“You have heard about CSME that would bring the Caribbean together. Now, we in Nevis have Geo-thermal energy and we are willing to share with you, our Caribbean brothers and sisters for we are one people,” he said.

Premier Parry underscored the importance for the Caribbean to continue to build bridges so that each island could provide links that would position the region to better manage its precious resources.