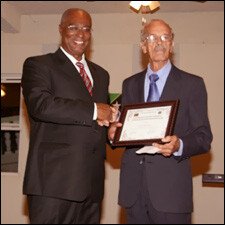 Eight persons who contributed to the development of Nevis, received public recognition from the Nevis Island Administration(NIA) on Wednesday at a ceremony to mark National Heroes Day.

The honourees were the first set of local heroes whose names will be forever etched in the annals of Nevis History.

In tribute to their selfless contribution the Nevis Island Administration through the Ministry of Community Development announced that a number of important landmarks would be renamed in their honour.

The Supply Office Building  at the Pinneys Industrial Site will be named the Levi Morton Building and the Island Main Road from Zion to Market Shop will be renamed the Ural Swanston Highway.

The formal renaming will be held later in separate ceremonies in the various locales at dates to be announced.

The awardees were each presented with a plaque from Premier of Nevis Hon. Joseph Parry, three of which were presented posthumously in the presence of family and well wishers. A compilation of their profiles was also read.