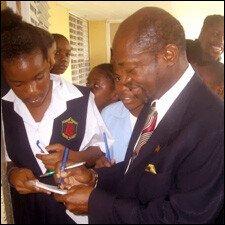 Two students from the Sixth Form of the Charlestown Secondary School are the 2009 State Scholar and Runner-Up.

CXC Local Registrar at the Department of Education, Mrs. Blondell Franks said Friday that based on the Scholarship Rank Order Listing for St. Kitts and Nevis provided by the Caribbean Examinations Council (CXC), Sashia Godet is the 2009 State Scholar and Michelle Slack, the Runner-Up.

“The listing is based on candidates’ performance on the 2008 and 2009 Caribbean Advanced Proficiency Examination (CAPE). Candidates are ranked by the highest number of Grade 1 passes obtained in seven qualifying units and then other criteria in the event of a tie,” said Franks.

In accordance with established criteria for determining the state scholar ranking, CXC computed T scores for both candidates to break the tie. Sashia was determined by CXC to have a T- Score of 485 and Michelle a T – Score of 474.

“The Ministry of Education hereby extends congratulations to Sashia Godet and Michelle Slack on their achievement and best wishes as they pursue further studies,” said Mrs. Franks in the statement.