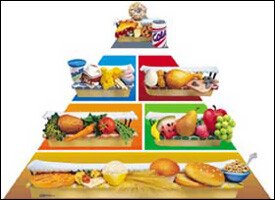 Families in various communities around both islands will also be visited and asked to conduct household trials, using one of the dietary guidelines.   Exercises have already been conducted in Cayon, St. Peter’s and Sandy Point, the most recent taking place in St Paul’s on September 15.  The personnel from the Ministries of Health, Education and Agriculture who will carry out upcoming sessions were trained by Dr. Pauline Samuda Consultant/Retired Expert in Nutrition Education and Training.  Dr. Samuda undertook the training during her last visit to the Federation, August 24 to September 9, 2009.

The FBDG process began in St. Kitts and Nevis in 2008 as a collaborative effort between the Ministry of Health and the Caribbean Food and Nutrition Institute (CFNI).  Financed by the Food and Agriculture Organisation (FAO), the process also included workshops with several government departments including Commerce, Agriculture, and Non Government Organisations such as members of the Chamber and Industry and Commerce.

A situation paper summarized the health and nutrition situation of the Federation and identified the main health problems including diabetes, hypertension, cardio vascular disease, strokes and obesity.

FBDGs are therefore a key source of information that governments can use for educating the public on ways to improve diets thus preventing some of the mentioned lifestyle illnesses.  It is this realization that has prompted the United Nations and governments worldwide to declare that all people have the right to a nutritionally adequate diet at all times.

The St. Kitts and Nevis FBDG process is expected to be complete by February 2010.