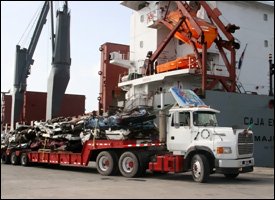 The Nevis Island Administration (NIA) has adopted an imaginative approach to deal with solid waste disposal. Minister of Health on Nevis Hon. Hensley Daniel said the move was strategic and necessary in the development of a modern landfill.

Mr. Daniel’s comment came Wednesday when a number of derelict vehicles collected by the Nevis Solid Waste Management Authority, during an earlier campaign, were compressed and shipped out by St. Maarten based company Scorpio Material and Services to a recycling plant in New Orleans.

“When we are developing a modern landfill, we have to think of reducing the pressure because of the fact that we don’t have lots of sites in which we could do this”¦We are looking at doing new things”.

Mr. Daniel said the NIA was mindful that health was the central most important issue in any society plus tourism officials marketed the Nevis as an upmarket destination were the reasons behind the massive clean-up campaign.

“In that context you have to ensure a certain level of aesthetic appeal in the country and if you are selling the country as an upmarket destination, then you cannot have derelict vehicles strewn all over the place.

“What we have done since October/November last year, is to urge people to bring in these vehicles, allow us to take them from them, we waived the cost of bringing them here because normally they would be charged for dumping them at the site. We were able to get 250 vehicles”¦ what we are doing is to reduce the amount of waste at the landfill that we have to process,” he explained.

The Health Minister noted that Nevis was small and therefore it was critical new ways were developed to do things and to think ahead. He pointed to the new communities that had emerged on the island which would create additional garbage for the landfill.

Mr. Daniel described recycling  as one step further in the reduce, reuse and recycle process  and made a special appeal in particular to mechanics to give up the vehicles that had outlived their usefulness which were rotting on their premises.

He said too, that plans also included the whole business of reusable and recyclable shopping bags which would ease the consumption of plastics.

Mr. Daniel used the opportunity to thank the Authority’s General Manager Mrs. Carlyn Lawrence and her staff for their efforts to keep Nevis clean.