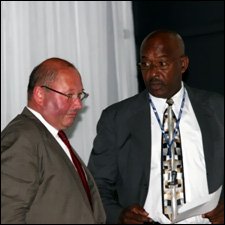 In a press statement, Secretary to the Commission also said that the matter would be held in open court.

The announcement followed a July 23 press release from Commission’s Secretary Mr. Morrice Tyrell at the end of a court hearing into an application by Mr. Amory, for an interim injunction which challenged the legality of the Commission.

It stated in part that on the evening of July 20, Commissioner Sharpe and the Nevis Island Administration had been served with legal papers issued on behalf of [former] Premier Amory.

“He was seeking a number of declarations seeking to declare the Commissioner’s appointment invalid and an injunction preventing the Commission from proceeding further. The Commission nevertheless proceeded with its planned hearings.

“A brief hearing was held at 2pm on Wednesday and the matter was adjourned till noon on Thursday 23 July. In the meantime, the Commissioner and the Administration filed affidavits in reply and a written argument, supported by numerous authorities, resisting the application.

“At the hearing at noon today Premier Amory’s counsel indicated that they had sought advice and now proposed to add a Ã¢â‚¬Ëœconstitutional claim’ which would require the Attorney General to be joined in the action. He also indicated that as it had become clear that no public hearings would take place until late September, at the earliest, the perceived urgency had disappeared.

“With the full approval of the Learned Judge, the case will go forward for a speedy trial sometime in August, and a timetabling hearing will take place next Friday to set out what needed to be done and by whom, and to set a trial date. In the interim, the Premier Amory’s revised case would be served on the Defendants and Attorney General.”