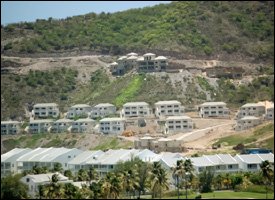 St. Kitts and Nevis Prime Minister Hon. Dr. Denzil L. Douglas is crediting the policies of his governing Labour Administration, the confidence of local and foreign investment and the resilience of the people for reducing the impact of the global financial and economic down turn.

Dr. Douglas said that continued construction activity at the US$2 billion Christophe Harbour Development on the South East Peninsula, the US$100 million Ocean Edge Resort and US$30 million Silver Reef Resort on Frigate Bay, are expressions of confidence not only in his Labour Party Government, but also the economic development of St. Kitts and Nevis as a well sought after tourism destination.

Prime Minister Douglas noted that while some hotel construction projects had been halted in several Caribbean islands including Jamaica, Grenada, Dominica, Barbados, Antigua and Anguilla, those in St. Kitts and Nevis continue.

He pointed out that in the midst of the world economic turmoil, while American Airlines had discontinuing flights to several Caribbean nations, the US carrier has increased to daily its scheduled flights between St. Kitts and Miami and introduced a twice-weekly flight on Sundays and Wednesdays between St. Kitts and New York.

Dr. Douglas welcomed recent announcements by British and American carriers to increase flights to the Robert L. Bradshaw International Airport in St. Kitts within the next few months.

Atlanta-based Delta Airlines, which currently operates a flight from Atlanta on Saturdays, will add a second weekly non-stop flight from Atlanta’s Hartsfield-Jackson International Airport operating on Wednesdays, beginning on December 23, 2009.

He pointed out that when EXCEL Airways curtailed its weekly flight between St. Kitts and London-Gatwick, as a result of the global economic downturn, British Airways, began a weekly service in January this year.

He said British Airways brought just over 4,000 passengers to St. Kitts and Nevis for the first half of 2009.

Dr. Douglas also lauded the hard work of his Minister of State in Tourism, Sen. the Hon. Richard Skerritt in the area of cruise tourism, which will next season see a record breaking half a million cruise passengers coming ashore.

“Tourism is working. St. Kitts and Nevis is working. Your Labour Party is working. Your Labour Government is working for the people of St. Kitts and Nevis,” said Dr. Douglas, who noted that since taking office in July 1995, his government as seen both local and foreign investment in the establishment of the Spice Mill Restaurant at Cockleshell Beach; La Belle Vie at Frigate Bay; Sky Safaris St. Kitts Ziplining Tour at Old Road; the St. Kitts Marriott Resort and Royal Beach Casino, the St. Kitts Scenic Railway, The Beach House, Bobsy’s Bar & Grill, King’s Palace, Star of India, Stonewalls, Reggae Beach Bar & Grill, Rock Haven Bed and Breakfast, Rock Lobster and Serendipity, scores of shops including Driftwood, and jewelry stores on the redesigned and reconstructed Port Zante and expansion of  OTI Hotel, Rawlins Plantation Inn and Ottley’s Plantation and the now popular Frigate Bay Strip.