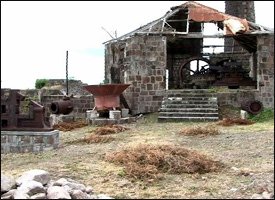 The Ministry of Tourism on Nevis revealed its plans to develop a plantation style museum at the old New River Estate to protect the island’s rich history.

Assistant Secretary in the Ministry of Tourism, Mr. Carl Williams told the Department of Information on Thursday that the move was one of many planned to ensure that Nevis maintained its hold and position in the tourism market place.

“Once the project is finished we are hoping that this development will compliment the Nevisian Heritage Village at Forthergills which would add a new dimension to our tourism product.

“We are aware that the tourism pie is getting smaller, but everybody wants a bigger piece. We therefore will have to use whatever we have,” he said.

The New River Estate was the last to pursue sugar on Nevis. Though the machines there were not in working condition, Mr. Williams said that the Ministry thought it was a good idea to showcase some of the activities that unfolded there many years ago.

He explained that the project which would be financed by the Ministry would be done in various phases.

“During the first phase we will have the clearing of the site. Presently there are some workers from the Ministry of Tourism who are ““ clearing the grasss, debris and picking up stones etc.

“The next phase will be the painting of the artifacts and the profiling of each piece. Then we will be looking at the roofing,” he said.

Meantime, two Nevisians who were at the estate at the time of the site visit gave their impressions of the project.

Mr. Elvan “Yabba” Nisbett from Brown Hill said “I think the plan will be a good project and I would like to see it prosper and for a lot of people could enjoy it in time to come,”

Mr. Moses Hendrickson who grew up in Fothergills and had worked on the estate registered his contentment with the planned project.

“I know this estate from when I was a young man. Cane grinding stopped at the year 1958, I can’t say what month, but I believe it is 1958. I worked here too during the time that it was going. I even got burned up here when I was small and I know a lot of things about this place.”

“I glad to hear that government going to do something wid [with] it because seeing it going down the road [dilapidated] it’s a shame. I do hope they will put it in good use so that the younger people could come and inherit from it and also attract tourist as they come in to see the old ruins,” he said.