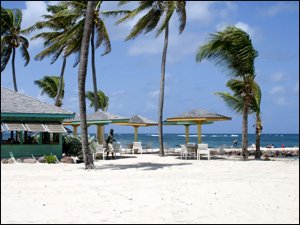 Nisbet Plantation Beach Club is the Cinderella of the Caribbean. From an old sugar plantation Nisbet has become the Caribbean’s best resort, according to TripAdvisor in 2008.

To celebrate its Cinderella status, Nisbet is offering a free five-night stay for the winners of the “Nisbet First Annual March Madness Cinderella Hoopla Contest.”

“For fans, March Madness is one of the most anticipated and intense sporting events of the year,” said Jamie Holmes, Nisbet general manager.  “So, this year, we thought it would be nice to offer two lucky winners a chance to relax and unwind and enjoy Nisbet’s peaceful setting.  Following March Madness, it’s a Cinderella ending to this year’s tournament for two fans.”

Entries must be received before Tuesday, March 17, 2009 “” when the NCAA Basketball Championship tips off.  Only one entry per email address will be valid.  Winners will be announced by April 15.

For complete rules and directions to enter, visit http://nisbet.luxuryhotelwebhosting.com

Meantime, for those who want to visit now, Nisbet also offers a March Madness special where guests who stay six nights receive a seventh night free.