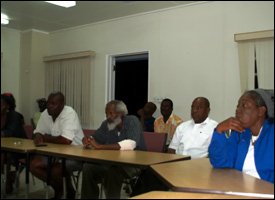 Premier and Minister of Tourism for Nevis, the Hon. Joseph Parry met with the Nevis Taxi Association Thursday night to discuss their important role in the island’s Tourism sector.

“I am happy to see that so many members have remained and that the association continues to strive!  The taxi association is absolutely, one of the most important parts of Nevis’ Land and Cruise based Tourism,” said Premier Parry.

The Premier, along with the Ministry of Tourism, which has responsibilities for Cruise Tourism, has visited Cruise travel offices, shows and seminars; and has sought to work towards improvements, especially in relation to taxi drivers.

The need for taxi drivers to be more cooperative, and work more closely with Cruise operators and agents such as TDC and Kantours, was highlighted at the meeting. It was also noted that taxi drivers need to avail themselves to information about the historical interests on the island. “Taxi drivers need to expose themselves to more seminars and become more aware about the history of Nevis, so that they can impart their knowledge to the tourists,” said Premier Parry.

Some visitors have complained that a few taxi drivers want to involve them (the tourists) in political discussions that are of no interest to them. According to Premier Parry, “Most tourists, if any at all, have very little interest in the politics of the island as they can not vote here; they do not live here and in most cases their only interest is in seeing the sights of Nevis.”

During his address to the taxi association, the Premier noted the sluggishness of the taxi industry due to the temporary closing of the Four Seasons Resort.  He reported that, according to the managers, owners and by all indications, the upscale property will open at their earliest convenience.

The meeting included a question and answer period where the taxi drivers were able to make their observations, state their concerns and pose questions to the Premier.

One taxi driver asked, “What is the situation with WINAIR and American Eagle?”

The Premier stated that presently negotiations are on-going with WINAIR; and with respect to American Eagle, the Premier said the airline will not be pulling out of Nevis fully; but we can expect some disruption in their service between May and October. Even with a possible guarantee, the airlines will not be able to fly, since they do not see it financially prudent to do so.

Another concern raised was the problem of rental cars at the airport cutting out jobs for the taxi drivers. In response, the Premier said he will look into the problem and come to a reasonable solution very soon between car rental companies and taxi drivers.

The taxi drivers also asked for the system to change in regard to concessions on taxi vehicles. The Premier asked the Association to write a letter with the query and said that it will be dealt with promptly.

The Premier ended the session by saying that Nevis is well known and respected as an upscale destination with numerous repeat visitors. “It is the obligation of Taxi persons to put much emphasis on the tourism industry on Nevis as taxi drivers are the face of Nevis! I advise and encourage you to dress well, keep your taxis clean, keep the conversation light and on the topic of Nevis history; and this will help the Nevis Tourism product.”