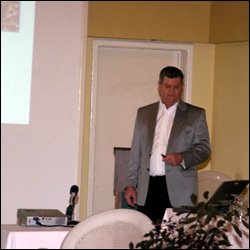 “Everything looks very favourable for a very successful project”; this is how Manager Steam Turbine Applications of TurboCare Inc. Mr. James Beverly described the exploratory works for geothermal energy on Nevis.

Mr. Beverly made the comment during a recent interview with the Department of Information. He was at the time on island to conduct a one day presentation on the type of steam turbines that his company – a wholly owned Division of Siemens – would use and its reliability, to generate geothermal energy at Nevis 3 in Hamilton and Nevis 1 at Spring Hill.

“It looks favourable for a very fast track project to be able to get it on line very quickly. In less than a year and a half we fully expect that West Indies Power (WIP) will be generating power out of this site [Nevis 3] or Nevis 1 site possibly and we are very excited to be invited to participate in the process,” he said.

Mr. Beverly explained that the minimum size of the turbines expected to be used at Hamilton was 5.8 megawatts and at Nevis 1 three miles away, 5.8 megawatts and possibly up to two 20 megawatts. He said the first unit could be upgraded.

“It is possible that the first unit will be later a few years down the road upgraded to 10 megawatts so that the first site would have a total capacity of 50 mega watts which is more than enough for both Nevis and St. Kitts. It would also handle years of growth for both islands,” he said.

A number of representatives were present at the conference and included interests from French St. Martin, Dutch St. Maarten, Saba and Statia, the Unites States Virgin Islands, Anguilla, Dominica the St. Kitts Electricity Department and the Nevis Electricity Company Ltd. All of whom had shown interest in purchasing geothermal energy from WIP.

Meantime, Minister of State in the Federal Government with responsibility for Information Hon. Nigel Carty who also attended the conference said he continued to be impressed by the geothermal explorations done on Nevis.

“I have been to Nevis 1 and Nevis 2 and now I am at Nevis 3 and I still continue to be fascinated by the results of the explorations so far,” he said.

He explained that the Federal Government through Minister Hon. Asim Martin had signed a letter of intent with WIP on September 28, 2008 but in light of recent conversations with the CompanyÃ¢â‚¬â„¢s top officials he believed the process should be expedited.

“I believe that with the Nevis Island Administration, the Federal government we have to sit down and come to some agreement as to how we are going to facilitate the laying of a submarine cable between Nevis and St. Kitts so that we can begin to benefit from the power which is going to be generated from these sights here in Nevis.

“I can say to you, I think the whole nation is really expecting good results coming out of the exploration which is happening here. I think the people on St. Kitts are just as excited as the people on Nevis because we all acknowledge that the price of fossil fuel on the world market is so high and it has been an inhibiting factor to the development of our country and so we would like to be able to benefit from cheaper energy which will of course bring an impetus to economic growth on both Nevis and St. Kitts,” he said.