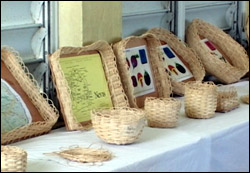 The art of basket weaving took on a new concept for Charlestown Primary School Students when they were told that their new skill could be used to enhance the economy of Nevis. The students were enlightened at the closing ceremony of a five-day workshop held at the Craft House at the Pinneys Industrial Site, on April 18, 2008, which was hosted by the Department of Cooperative in Nevis.

Representing the Hon. Robelto Hector who is responsible for Cooperatives in the Nevis Island Administration (NIA) was the Department’s Permanent Secretary (PS) Mr. Pearlivan Wilkin, who motivated the students to remain committed to the experiences they had gained from attending the workshop.

He also enlightened them about the importance of making craft. He told them that craft had never been more important than it was now, since it could help to alleviate economic hardships for individuals during difficult times.

He further brought to the student’s attention that craft making had become significant in the society and to possess craft skills would help to generate extra income which would improve the standard of living for those who found a niche in designing crafts.

Mr. Wilkin reminded students that exhibiting craft skills would display their creativity and how well they were able to experiment and transformed rattan materials into baskets, trays and other decorated items that were displayed during the closing ceremony.

He implored students to continue to think positively and to believe in themselves as they remained committed to whatever task they were good at.

“Continue to discipline yourselves and may the satisfaction which you experienced be the motivational force that will propel you to the next level,” he said.

Mr. Wilkin assured the potential entrepreneurs that their handiwork would be displayed during the 2008 two-day Agricultural Open Day slated for April 24 to the 25. He further announced to the students that outstanding exhibits would be shown at Nevis’ 25th Anniversary of Independence Exhibits to be held at a later date.

He also commended the Department’s Director Mr. Samuel Powell, the workshop’s facilitator and other staff members from the Cooperative Department for having organised the workshop and congratulated the students who attended the basketry course.

Students were awarded with a certificate that was signed by Mr. Wilkin, Mr. Powell and workshop facilitator Ms. Iona Rogers.

The Director of Cooperatives added poignant words of encouragement to the students as chairperson for the ceremony. He also gave a historical background of basket weaving and explained that the workshop’s main objective was to equip students with the skills of basketry, which they would use to make crafts for themselves from rattan material. He also indicated that basket weaving could help them to earn an income as it related to the tourism sector.

“Basket weaving is a craft of weaving together anything that bends or forms a shape. Regardless of where they would be seen, baskets are still popular today as they were in the past but I guess for less functional reasons. There is a certain aura that surrounds basket making. Perhaps this is due because it is one of those crafts that had never been modernised.

“Baskets were used simply for storage and transportation for goods. With decoration being an after thought and while people enjoyed a functional basket today, society appear to be more interested in baskets that really served a decorative purpose than those of our ancestors,” Mr. Powell said.

Ms. Rogers conducted a similar workshop last year at the Gingerland Primary School. She was commended by Mr. Powell for her work invested in the students and for her imparted skills.

The Easter vacation workshop was conducted in keeping with the NIA’s commitment to its Social Transformation policy for all Nevisians.