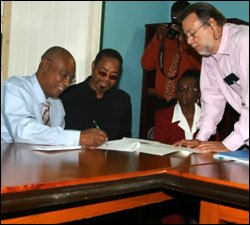 An agreement was signed between the St. Christopher and Nevis Social Security Board and the Nevis Island Administration (NIA) on Wednesday for an additional $5million, for the Civil Servants Mortgage Scheme.

Premier of Nevis Hon. Joseph Parry applauded the Board and pointed to the immense assistance [$34million] the NIA had received over the years and in particular under his leadership in the past three years. He said the money had helped the island’s economy to grow and provided housing for Nevisians.

“I am very pleased to see that government workers have been benefitting from this exercise and it can only enhance and improve the quality of life for all these people.

“I am particularly pleased that we are having an additional $5million and that will go a long way, at a time like this, when we are still suffering from recession. It will help create employment on the island, it will help to keep people at work [and] it will help to support families,” he said.

The Nevis Civil Servants Loan Agreement for $10million which was signed by both parties in July 2007 has been described as a crowning achievement in the Nevis Reformation Party-led Administration’s first year in office.

The Civil Servants Home Mortgage Scheme which has so far benefitted 40 persons, is monitored and managed by the Nevis Corporative Credit Union and has provided funding for home construction and renovations for the NIA’s employees.

As Nevis’ demand for housing continued to grow, it was the first time in the island’s history that civil servants were specifically facilitated for housing finance.

Meantime, Mr. Parry used the opportunity to announce his receipt of a cheque for $488,000 from the Board which would be used to stimulate the island’s economy.

“I am happy to state to the people of Nevis that this advance is to provide ultrasound equipment. That machine should be here very, very quickly and the people would be able to get very good service at the Alexandra Hospital.

“Secondly, it [the money] will give support to the work that has already started [expansion works] at the Charlestown Secondary School, to advance the staff room to give relief to those 80-90 teachers and also to provide additional classrooms,” he said.

Mr. Parry noted that there were plans for other projects that would help to provide employment and stimulate the island’s economy.