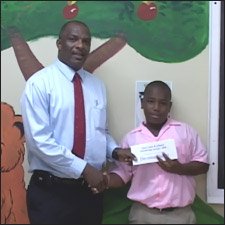 Devontae Daniel of the Cayon Primary School was introduced on Friday, as the final recipient of the 2009 Cedric Liburd Scholarship Award.

Minister Liburd told the class that the investments in education over the past decade have had a positive impact on the nation. He noted that government was presently working to upgrade the education system and he appealed for all students to appreciate and make use of the opportunities provided from a good education which has been offered free of charge for the past 40 years.

Devontae and his aunt thanked Minister Liburd for his contributions and assured him that the funds will be used to advance the development of the young man as he prepares to enter the Cayon High School in September.

Minister Liburd has been making similar donations to students from his constituency for the past 14 years.