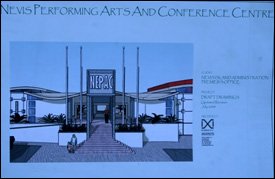 Top culture officials on Nevis have sounded an early call to the Nevisian public, to protect the Nevis Performing Arts and Conference Centre. Construction for the 18,000 sq. foot facility at Pinneys Estate is planned for later this year.

Culture Advisor to the Nevis Island Administration Mr. Halstead “Sooty” Byron urged the public to take an interest in the facility when the project was completed.

“I want to start early to say that whenever this project is completed and even before it is completed, that we will all take an interest in it, interest where we are wiling to be our brothers keepers, we are willing to take care of the facilities and the entire premises of the Nevis Performing Arts and Conference centre.

“There are so many possibilities in terms of what this can do for us and we certainly look forward to that,” he said.

Minister with responsibility for Culture on Nevis echoed similar sentiments as Mr. Byron and cited that vandalism should not be allowed to raise its ugly head at the building. He noted that the cost of the facility would be bourn by every single person on Nevis.

“[It] remains the best facility in the OECS because we have cared it, which means we can and so as we start construction I want us to understand that we are spending money for the enjoyment and for the betterment of the people and that all we ask, is that every care be taken to ensure that this building lasts for future generations,” he said.

The project which will make provisions for drama, dance, music, conferences and open air events will be funded by the Government of Taiwan through a grant of US $1million and a loan of US $2million.

Design drawings and a complete bid package for the project was handed over to Minister Daniel last week by Mr. John Baker of IXI Design N.V. Architects based in St. Maarten.

During the presentation Mr. Baker expressed the hope that the facility would be used and enjoyed by many people and many groups.

“There is space that can be used for fashion shows, for music shows for many kinds of opportunities for many groups within your society to use and that is the intention. It is something that will be used and enjoyed by many people for many years,” he said.