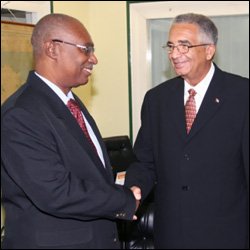 Premier of Nevis Hon Joseph Parry, welcomed new resident Cuban Ambassador to the Federation of St. Kitts and Nevis, His Excellency Jorge Desiderio Payret Zurbiaur, at his Bath Hotel Office on Tuesday. The meeting came one week after he bade farewell to outgoing Ambassador Ana-Maria Gonzales.

Mr. Parry told him that Ambassador Gonzales had done excellent work and had laid the foundation for closer relations with Cuba.

“Ambassador Ana-Maria was excellent. She has laid the foundation and I know you will continue to build on that as you bring our countries more closely together. Thank you very much Sir and welcome,” he said.

The Premier noted, that the government and people of Nevis were appreciative of the work that the Cuban government had done to assist the Federation and in particular in Nevis.

He pointed to the assistance of the Cuban doctors and the nine patients from Nevis who had been referred to Cuba for specialised medical attention that was not available on Nevis. Mr. Parry said they returned to Nevis satisfied with the treatment they had received.

“We are also thankful for your doctors who are here working with us and for the training of our doctors, we are hoping to have nurses trained and we are looking forward to doing some cooperation in agriculture as well,” he said.

The Premier explained that he was aware that Cuban personnel were in the Federation to assist with the assessment of the monkey population.

“It is my understanding that already in the Federation, there is a gentleman trying to assess the population of the monkeys both in St. Kitts and Nevis. That is only the first phase because as we have said, it is the control of the monkeys that is important so that farmers can continue to do their work,” he said.

In response, Ambassador Zurbiaur thanked Premier Parry for having received him so soon after his arrival to the Federation.

He said he had already met with the medical doctors and other Cuban personnel who were in the Federation and they had all expressed satisfaction with their working conditions.

The Ambassador said that the relationship already forged in the area of health was a good first step to assist patients on Nevis.

“I hope that the healthy and friendly relations that we have will continue expanding,” he said.

Prior to his posting to the Federation, the Ambassador explained that his 40 year span in the Cuban Foreign Service had taken him to Scandinavia in Central Europe, the Czech Republic and Ecuador in Latin America. St. Kitts and Nevis was his first posting in the Caribbean.

“That is why I am very pleased to be here in an area that we are a part of also. So as much as we can do for cooperation in the Caribbean the better,” he said.