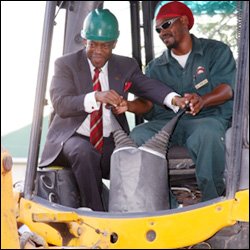 Premier of Nevis, the Hon. Joseph Parry and Prime Minister and Minister of National Security of St. Kitts and Nevis, the Hon. Dr. Denzil Douglas broke ground for the construction of new police barracks at Belle Vue for Police officers stationed in Nevis. The ground breaking took place in the presence of Ambassador of Taiwan for St. Kitts-Nevis, His Excellency Mr. Rong ““ Chuan Wu.

“Comfortable facilities are needed to give law enforcement the upper hand to tackle crime on Nevis.  Through proper investments in our law enforcement like this, we will help make the streets of Nevis safe,” said Premier Parry during the ground breaking ceremony held at the Bath Hotel grounds on Thursday, November 12, 2009.

The Taiwanese government provided $800,000 for the project as part of its agreement with the Nevis Island Administration (NIA) to assist with crime prevention on the island.

According to Premier Parry, building project represented a powerful and inspiring collaboration between the police force, the Taiwanese Government and the NIA.

The Premier informed the crowd that the plans for the police barracks have been completed and sent to the Planning Department.  He also noted that another set of Police Barracks will be coordinated in Butlers Village by local businessmen Mr. Ken and Arthur Evelyn, who had donated half an acre of land from their estate for the project.

Mr. Parry also indicated that a new police station will be built in the village of Cotton Ground in an area known as Five Turnings.

“By the middle of next year, the police station in Cotton Ground will be completed and ready to facilitate 30-40 officers very comfortably,” he said.

During brief remarks at the ground breaking ceremony, Prime Minister Douglas said that the project was part of the enhancement for the security infrastructure of the island. He also stated that Mr. Wu, a former policeman, had seen the need for the development and made it possible to assist with the security force on the island.

“This assistance by the Taiwanese government should be congratulated as should LIME telecommunications, which has set up the line for surveillance cameras in Basseterre and a set soon to be established in Charlestown,” remarked Dr. Douglas.

Ambassador Wu told those present at the ceremony, that his country was committed to assist the Federation. He also said that he was fully committed to cooperate with useful and effective projects put forward by the Nevis Island Government.