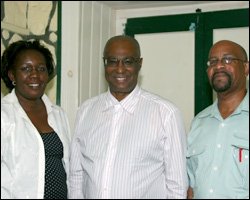 In brief comments after the meeting at his Bath Hotel office, Mr. Parry said it was good to see Caricom involved in the electoral process, aside from the other work they have been involved in, in member states.

The two member team was made up of Project Officer in the Caricom Secretariat based in Guyana Ms. Mignon Bowen and Chief Elections Officer in the Electoral Department of St. Lucia Mr. Carson Raggie.

Meantime, Ms. Bowen explained that their visit to Nevis was part of the team’s effort to meet with the various stakeholders for to gather information before Monday’s poll.

“We are more or less trying to gather as much information as possible in terms of your preparations. We are quite pleased with how things have gone so far.

“We have learnt of your new Voter ID card which is a very good move and we have heard very positive comments about that but there are still some concerns about the final list,” she said.

The Caricom Official gave an insight into the group’s plans on elections day but up to Friday, was uncertain whether a member of the team would be posted on Nevis.  However, she noted that the team, which also included electoral officials from member states, would be out early Monday morning, to witness the process.

“We are going to be out early so we should witness the opening of the polls, voting process, the counting of the ballots as well as the close of the poll and we will be there to observe the results as they come in,” she said.

Mr. Raggie added that apart from monitoring to ensure the electoral process was free and fair, the team had gathered information from stakeholders who had concerns about registration. He said the team would use the opportunity to observe and to make a determination whether those concerns were negative or positive.

At the end of the General Elections the Caricom Observer Team who is in the Federation under the direction of Secretary General of Caricom the Hon. Edwin Carrington, will present its findings to him, since the invitation for Caricom to mount an Electoral Observer Mission came from Prime Minister of St. Kitts and Nevis Hon. Denzil Douglas.

The report would then be made available after a Heads of Government meeting to the Government of St. Kitts and Nevis.