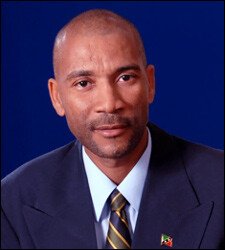 People’s Action Movement Constituency two representative, Roy Fleming has declared that the actions of the St. Kitts Labour Party are devious, under the leadership of Dr. Denzil Douglas, and he is intentionally unfolding his wicked plot to destroy his Labour party.

Fleming declared that despite the Labour Party’s efforts it will not succeed noting that it is a wicked and dastardly act.  He said that based on intelligence gathered by the party they have been informed of a well-financed plot by Dr Douglas and his Labour party officials to promote disharmony and confusion as part of a wider plan to remain in office regardless of the choice of the people.

He said that they (PAM)  have concluded that Dr. Douglas is bent on remaining in office at all cost and as such have sought to use all resources necessary to ensure this position. “Dr Douglas knows that he and the Labour party have a miserable record and therefore they are desperately seeking the people’s vote so as to remain in office. Consequently, they are seeking to garner our support by the use of empty promises but  I will continue to tell all voters to take whatever they (Labour Party) are offering but vote them out,” he declared.

According to Fleming, a number of candidates and representatives from the Labour Party have been approaching supporters of PAM, to endorse their plan while offering them bribe through monies and promises of favours. “We within the People’s Action Movement are aware of plans by Douglas and the Labour Party to seriously undermine unity within the Federation of St. Kitts and Nevis by getting into divisive politics,” he said.

Fleming said that while the government finds time to get involve in such unprofessional and unethical conduct, people continues to express concerns over economic hardships, crime, corruption; disregard for the poor and powerless; increasing and continued executive lawlessness, the growing scourge of illiteracy due to our collapsing education system; the inadequacies and fragility of our medical services among others.

Fleming stressed that the Prime Minister in his 15 years in government have failed to make consultations really meaningful, ensure that the electoral list is free of voter fraud, remove the government television broadcast monopoly, pass Freedom of Information Legislation, and bequeath to future generations, a society where all Kittitians and Nevisians will be fully involved and feel a sense of pride in being a citizen of St. Kitts and Nevis.

He declared that PAM is a responsible Party which is committed to bring about development and progress in St. Kitts and Nevis once elected.  He added that it (PAM) will commit to providing representation for all of the people of this Federation.

Fleming emphasized that the public should go out and ensure that they cast their vote stressing that once registered they should assist in ensuring change so as to rescue the people of St. Kitts and Nevis from the current crisis at hand.