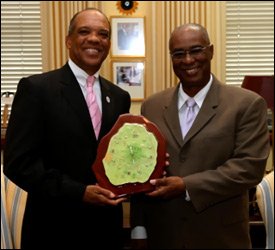 A boost to Nevis’ Tourism and Financial Service sectors was the objective of Premier Parry’s visit to Bermuda recently.

Bermuda which has a thriving Financial Service and Tourism Market opened their doors to Premier of Nevis, Hon Joseph Parry and Permanent Secretary in the Ministry of Finance, Mr. Laurie Lawrence who observed what the Caribbean British Colony has done to reach that plateau.

Premier Parry and Premier Brown discussed important sectors of Tourism such as:  finance, Administrative, Regulatory, Promotional services, Sales and Marketing. Premier Parry visited with various hotel properties such as 9 Beaches and a number of other mid-market and upscale properties.

Premier Brown suggested that a steady control growth is the best method to start with declaring one hundred beds and two additional hotels could possibly be Nevis’ maximum for awhile.

Meanwhile, Premier Parry paid courtesy calls to the Berkley and Cedar Bridge Academy where he observed the schools courses and the way the children did most of their work on computers.

Premier Parry said he was most interested in a program offered at one of the schools which exposed the children to the world of work. The students are taught the business code of dress, business English and resume writing. After the course is completed a Certificate is awarded to each student who passed.

All in all, Premier Parry said the trip was successful and he is pleased with the innovative knowledge that he has gained. The Premier went on to say that with the assistance of his administration, the Nevis Tourism and Financial Sectors can receive a surge of benefits in the near future.