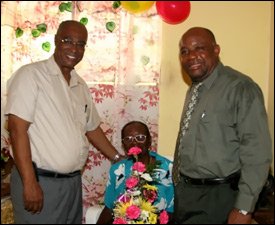 Premier of Nevis and Area representative for the St. Thomas Parish Hon. Joseph Parry joined the Department of Social Services on October 09, to laud the efforts of Mrs. Luella Budgeon of Jessups Village. She was honoured as part of Nevis’ celebration of International Seniors Month 2008, for her invaluable contributions to the villages of Jessups, Cotton Ground and the community of Nevis.

The Premier referred to the 78 year old grand mother as a strong, kind, determined, loyal and good Christian person and someone he was proud of.

Mr. Parry recalled her having worked as a small business woman who sold “sweet drink” up till recently but more so remembered her as a survivor of the ill fated MV Christina which sank off Nevis in 1970 and the assistance she rendered to others then.

“She was on the Christina and her then husband was entangled in the ropes and she entangled him, so he to was saved and is alive today. Thank God for the life he has given her,” he said.

The Premier also presented Mrs. Burgeon with a certificate of appreciation on behalf of the Social Services Department, in recognition of her valuable contribution to the community.

Meantime, Minister with responsibility for Social Services Hon. Hensley Daniel was also present and he too expressed his gratitude to the honoree. He reiterated the Nevis Island Administration’s promise to take care of the island’s seniors and to ensure they lived in conditions that were satisfactory.

He said Mrs. Burgeon was one of several persons honoured, who many people may have taken for granted but the Administration’s public recognition, was designed to let the public know of their contributions since in his view, they were our real heroes.

In response Mrs. Burgeon expressed her thanks.

The Honoree was also presented with a bouquet of fresh flowers on behalf of the Department, by Social Worker Mrs. Janet Herbert.

Also present was Fr. Alric Francis who thanked God for her gift of life and for her contributions. He was hopeful she would continue to make her contribution through herself, her children and grandchildren.