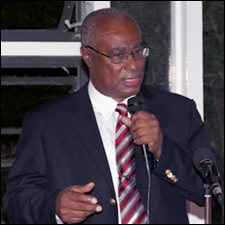 While officials have been challenged to diversify Nevis’ tourism product, Premier and Minister of Tourism the Honourable Joseph Parry says, “diversification would initially focus on building what we have.”

Premier Parry, whose remarks came at the recently held awards cocktail for the Nevis Tourism Authority, challenged Nevisians to capitalise on existing features and products. This, he said, would make the island more marketable.

With plans toward the construction of the Aman Hotel and other developmental projects underway, the Tourism Minister said the aim was to enhance, not change, Nevis.

“The Four Seasons, when it came, they were told they could not change what we have and they fit it in nicely. When the Aman comes they not only would not change but they are part of that kind of thinking and this is why they have been attracted to Nevis,” Mr. Parry said.

The Aman Hotel and the Charlestown Waterfront project, he added, “will grow the island, will grow tourism” and “be added products that can help us to stay afloat but even as we do these things we are to look at the whole product which is keeping the island clean.”

The appeal to “keep Nevis clean,” according to Mr. Parry, resulted from “seeing things dumped that should not be dumped.”

Premier Parry said that although it is often said that Nevis is “extremely clean” residents should join forces to “make it even cleaner and more attractive.”

“Sometimes you see organisations and groups actually cleaning the sides of the roads and they are really taking away a lot of rubbish and it is not a good sight so even though we are told how beautiful the island is and how clean it is, let us determine that we can do an even better job at making it attractive and environmentally friendly,” he said while reminding residents that the island’s dumpsite is located in the St. John’s/Long Point area.

During his remarks, the tourism official recorded his appreciation to the NTA for its continued efforts toward the development of Nevis’ tourism product.