Nevis Premier – Hon. Joseph Parry Charlestown, Nevis May 03, 2011 While officials have been challenged to diversify Nevis’ tourism product, Premier and Minister of Tourism the Honourable Joseph Parry says, “diversification would initially focus on building what we have.” …

Laurie Lawrence and Joseph Parry Charlestown, Nevis April 29, 2011 Nevis’ Premier and Minister of Tourism, the Honourable Joseph Parry, was publicly applauded for the support and enthusiasm he exhibited toward his island’s tourism industry. The words of appreciation, delivered … 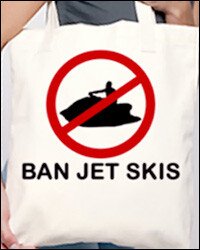 Noisey, Smelly Jets Skis To Be Allowed In Paradise Basseterre, St. Kitts – Nevis August 23, 2010 (CUOPM) St. Kitts and Nevis is lifting a 15-year ban on the importation of jet skis into the twin-island Federation. The ban on …

Organisation of American States (OAS) Director Mr. Starret D. Greene during the Consultation held at the Mount Nevis Hotel
In accordance with the Nevis Physical Development Planning Ordinance 2005, the Physical Planning Unit in the Nevis Island Administration (NIA) held a Stakeholders Consultation on April 10, 2008, at the Mount Nevis Hotel, to embark on the process of developing physical development plans for specific areas on Nevis.

The Organization of American States (OAS) Director to St Kitts and Nevis Mr. Starret D. Greene, who spoke at the consultation, confirmed that the OAS through its Secretariat for Integral Development (SEDI) approved the Nevis Physical Development Plan, with funding from its Special Multilateral Fund for technical cooperation.

He further added that through the project, the goal of the OAS was to further strengthen its partnership with the Federation of St. Kitts and Nevis and to provide help to Nevis for the development of a comprehensive system of land usage.

“Moreover, the OAS recognised that land was a premium on the island of Nevis, given the islands relatively small size and it was essential to develop a legal, administrative and managerial system that would ensure an orderly long-range development plan to guide every aspect of the islands physical development,” he said.

Mr. Greene revealed that plans for Charlestown and Newcastle would be executed initially and the full cooperation of the NIA, had given rise to a number of important initiatives that produced an island wide plan.

He further noted that the Department considered a number of critical issues such as the historical plan for certain areas on the island, relationship with the community; surrounding land usage; existing landscape and open spaces; circulation and transportation and existing environmental resources which included a long term development plan for agriculture, tourism development, commercial and residential development, national parks and recreational areas and lands to be used by current and future generations. 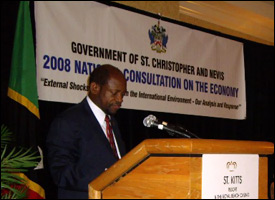 “Our financial institutions remain strong, and investors ““ local and foreign ““ continue to place great confidence in the growth prospects of our Federation,” Prime Minister Douglas told the opening ceremony of the 2008 National Consultation on the Economy.

Prime Minister Douglas pointed to the continued development of the Marriot expansion plans that will see more than 300 additional hotel rooms added to St. Kitts and Nevis.

“The Kiawah group is still working steadfastly to expeditiously commence construction on the Mandarin Oriental Hotel as the first phase of a comprehensive development project that will transform the entire Southeast Peninsula into a world class tourism development capable of competing with any similar development on the face of the globe,” Dr. Douglas said, adding: “We cannot take our progress for granted.”

He pointed out that St. Kitts and Nevis as a small nation continues to be extremely vulnerable. “Indeed, even the global experts seem unsure as to how long the global credit crisis and the resulting economic slowdown will last. Hence, we cannot be certain that we will not be affected even more severely if these global problems are prolonged. We must therefore devise strategies aimed at mitigating, to a significant degree, the risk associated with the tumultuous changes in the global environment,” Dr. Douglas told the 200 participants drawn from the Federal Government and Nevis Island Administration, the National Assembly and the Nevis Island Assembly as well as representatives from several organisations including the St. Kitts and Nevis Chamber of Industry and Commerce, bankers, the Contractors Association, the Association of Disabled Persons, students of the Clarence Fitzroy Bryant College and the he Hotel and Tourism Association.