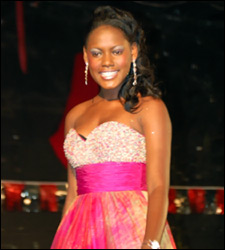 A 16-year-old Verchilds High School student, Zaiesha Joseph walked away with the coveted and prestigious title of Miss Labour 2011-2012 title on Saturday night.

Joseph, whose older sister, Zionshaw, is the 2010 Miss Back to Roots of the Clarence Fitzroy Bryant College (CFBC), amassed a total of 443 points.

The Best Creative Wear category was won by 18-year-old Nakita James, representing Constituency 2 (Central Basseterre) with a total of 117 points.