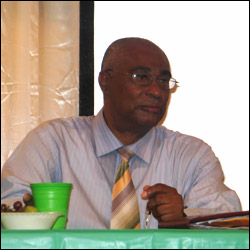 Premier of Nevis, the Hon. Joseph Parry, Deputy Premier ““ Hon. Hensley Daniel and Minister Hon. Carlisle Powell returned to the Federation Monday afternoon after addressing Nevisian Nationals residing in Toronto and New York this past weekend. While in North America a number of important issues were discussed at the town hall meeting, among them being geothermal exploration in Nevis.

“Last week Monday marked an important time for geothermal energy as the first commercially sound reservoir at the Spring Hill site jetted steam from a depth of 3,720 feet. There is still much work to be done before this steam can be turned into electricity, but with an approximate temperature of 480 degrees Fahrenheit, I have been told that 34 megawatts of energy can be supplied and that is enough energy to supply St.Kitts and Nevis with surplus,” said Premier Parry.

The report on geothermal energy was assisted by a well organised power point presentation that contained the areas on Nevis where geothermal could be found, a history of geothermal development on Nevis, production steps (Geology, geochemistry, geophysics, drilling and production of the resource), benefits to Nevis (royalties and less expensive energy) and a host of pictures and text to explain the geothermal process for Nevis.

During the question and answer period in Toronto, a young lady asked, “who would the geothermal energy belong to and whether it would be under the ownership of St. Kitts.”

“There seems to be an insufficient level of misunderstanding of the constitution which is unfortunate. I say that because Nevis in the constitution has exclusive responsibility for a number of areas which include water, the right to produce electricity and minerals, etc. Those are under exclusive powers to the island of Nevis. We the Nevis Island Administration have no need to request of the Federal government, the right to geothermal resources. If the NIA find oil, gold or silver in Nevis, we have no need to speak to anybody in St.Kitts or the Federal Parliament because these are under the exclusive powers which we have in Nevis. The constitution order of 1983 has outlined specifically that whatever resources is found in Nevis belongs to Nevis,” articulated Minister Powell.

He went on to say, “for proof of the Nevis ownership of the geothermal energy resource, persons can refer to section 106 of the St.Kitts- Nevis constitution on page 77 and for proof of legislation powers, one can look at page 93.

Premier Parry supported the statement by Minister Powell by declaring the topic of geothermal has been discussed thoroughly, while the Federal government and the Nevis Island Government have had joint meetings and the matter has been looked at.

“The Prime Minister of St.Kitts, Hon Dr. Denzil Douglas, has given full support and cooperation by allowing the assistance of the Organization of the American States (OAS) to help organise and assist with the Draft Bill for Parliament and the Draft Purchase Agreement. The Federal government is very excited by the find in Nevis because St.Kitts can also benefit by receiving the energy supply at a less expensive rate,” said Premier Parry.

A number of regional islands have had open discussions about Nevis supplying them with geothermal energy. Neighbouring islands such as the U.S.VI, Saba, Anguilla and the BVI has shown an interest in receiving energy from Nevis.

Premier Parry declared, “I am hoping more wells can be found in Nevis so we can export energy to a number of other countries and then Nevis can receive additional employment and royalties for selling geothermal energy to regional islands. All royalties will go to the Nevis Treasury where hopefully an injection of over EC$100 million over a five year period will take place.’