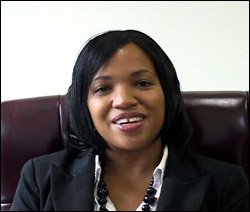 Fathers and Fathers-to-be on Nevis, will receive a special gift from the Nevis HIV/AIDS Unit in time for Fathers Day, when it hosts its second national testing day activities on June 14, 2008. The activity will be held at the Villa in Charlestown from 10 am-5pm.

Acting Health Planner and HIV/AIDS Coordinator on Nevis Mrs. Nicole Slack-Liburd told the Department of Information on June 10, 2008 that the event themed “Take the test take control” and “Men know your status; protect you, protect me protect us”  would target fathers because women were the ones who had primarily received testing for the disease.

“Our target audience this time around is primarily men because we realise that in comparison to women men are under tested here in Nevis so we are targeting them this time around.

“The primary reason people get tested here in Nevis, we realise, are for insurance purposes, for work permits and also we do encourage anti natals to test and we are finding that the majority of persons getting tested are women, so we are putting on this activity for Fathers Day on the day before Fathers Day so we are giving men a gift of testing and it is important to test,” she explained.

Mrs. Liburd explained that the event was initially planned for June 27 to coincide with the world wide observance of National Testing Day, however it was moved up to the day before Fathers Day because it was important to get men involved in the testing.

She said the testing activity would be a three step confidential process which would involve voluntary counseling and testing.

“The process would be voluntary counseling and testing so it won’t be persons just coming in and getting the test but we will ensure that you are well prepared with the pre test counseling, you will receive the test and then go to post test counseling and this will all take place in one location. You can get your results within an hour or so. We have about six nurse counselors that will be based right here at the Villa in individual make shift room so we will ensure total confidentiality through this process.

“Our lab will be down on the field also so you could get your rapid test done privately of course and everyone will be assigned a code. We won’t be using any names you will be going for your pre test counseling to that same nurse and you would be returning to her for your results. So we will ensure total confidentiality through this process,” she said.

Mrs. Liburd advised fathers and those to be to get tested since the HIV test was not just for their benefit but also for that of their family as well.  She noted that it was documented that HIV could spread from mother to child and men had a role to play in that process as well, so it was important that they knew their status to avoid passing the virus on and to keep themselves healthy to provide the necessary financial support for their children.

“So for Fathers Day don’t just give that gift to your self but to your family,” she said.

Notwithstanding, Mrs. Liburd commended the sponsors who had joined the Ministry of Health’s initiative to stage the activity and said the move showed the Unit’s multi-sectoral approach to HIV testing on Nevis.

She also spoke to an incentive from the two main private sector sponsors.

“Two of our major sponsors are Carino Nevis and Cable and Wireless and they are offering for the first 100 persons that come forward and take the test they will receive a $10 top up on that day, so you have to go through the entire three step process and you will receive the $10 top up,” she said.

Other sponsors are Caribbean Cable Communications, Reliable Motors, Surrey Paving and the Ultimate Band will would provide DJ services and live music during the activity. Mrs. Liburd said the activity would be held in a festive atmosphere with music and refreshments to encourage the men to spend the day with the Nevis HIV/AIDS Unit.