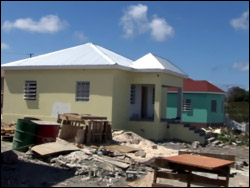 Twelve structures are currently under construction at the site which is located at the back of the Charlestown Primary School.

“This project is in keeping with our commitment to provide affordable housing for Nevisians.  Certainly in my mind, we have done well,” Minister Hector said.

According to him, the Administration had facilitated the construction of more than 100 homes.  He offered congratulations and expressed gratitude to Manager Nisbett and all others who contributed to the dream of creating affordable homes for Nevisians.

The Housing Minister craved the indulgence of those persons who applied for housing and advised them that the Government had been working diligently towards meeting their needs.

“Let me take the opportunity again to assure those who have applied to the Corporation for housing, that the government has ensured that two schemes are running at the same time; our Affordable Housing Scheme by the Corporation and then there is the Civil Service Scheme in which the Corporation is also involved.  We ask in some cases for patience as we strive to serve you the public,” Mr. Hector said.

Meantime, the NHLDC Manager gave an update of the project and was particularly pleased with the progress made thus far.

“The second phase of this project commenced around mid-March 2008 and here we are at the first week of June and we are about 75 to 80 percent completed,” Mr. Nisbett said.

According to the Manager, the construction aspect of the project was near completion and he eagerly awaited the commencement of the third and final stage.

“We expect that the major construction work on this project to be completed by the end of June this year after which we have some sub-contracts for painters and cabinet makers that would come in and do the completion work for this stage,” Mr. Nisbett said.