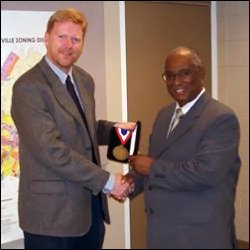 The Premier of Nevis, Hon. Joseph Parry was presented with a key to the City of Charlottesville, Virginia by Mayor Dave Norris on Wednesday, September 30th at the office of the Mayor.

Mayor Dave Norris said he was pleased to honour a Caribbean leader with the prestigious award. Mr. Norris said the key to the city is a symbol of good governance and a tie that can bind Charlottesville and the island of Nevis.

At the ceremony, Pastor Lehman Bates of the Ebenezer Baptist Church International Mission who hosted the Premier’s visit to Virginia also spoke; stating that on behalf of the people of Charlottesville he is proud to salute Mr. Parry for his hard work on the island of Nevis, which is for the betterment of the residents on the small Caribbean nation.

In response, Premier Parry thanked the Mayor, the Pastor and all involved in making the ceremony possible.

While in Virginia, Premier Parry and Pastor Lehman Bates were interviewed on local television by popular host Andrea Cobalt. The three spoke about the island’s main economic industries and the history of Nevis, which gave some basic information to viewers who were not familiar with the island.

Premier Parry also visited the famous University of Virginia ““the Rotunda and the University hospital, where he observed various aspects of the hospital’s updated machines and programmes.  The Premier was escorted throughout the hospital and University by Interim Vice President and Chief Officer for Diversity and Equity, Dr. Marcus Martin.

On the last leg of his stay in Virginia, a special dinner reception was held in the Premier’s honour.  The Premier was asked to say a few words in which he took the opportunity to inform the dinner guests about Nevis and how the tiny Caribbean nation which has a similar African slavery background to the United States, is now run by mostly people of African descent.

After the speech by Premier Parry, many persons commended him on his positive message. They also took the opportunity to wish the best for him as he continues with his mission to move the island forward.