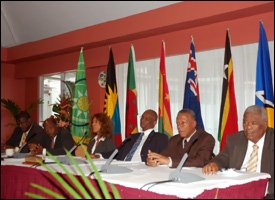 OECS Meeting In BVI – May 2009
Photo By Erasmus Williams

Premier of the British Virgin Islands, the Hon. Ralph T. O’Neal, OBE has given full support to the Prime Minister of St. Kitts and Nevis Hon. Dr. Denzil Douglas following his assumption of the chairmanship of the OECS Authority, the highest decision making body of the Organisation of Eastern Caribbean States (OECS).

Premier O’Neal, who hosted the 49th Meeting of the OECS in Tortola in May this year, expressed his pleasure that Dr. Douglas has agreed to assume the leadership of the OECS Authority. The BVI Premier has extended his full support to Prime Minister Douglas and the work of the OECS Secretariat under his leadership.

Dr. Douglas will assume the chairmanship at the 50th Meeting of the OECS Authority scheduled for November 19-20 in Anguilla.