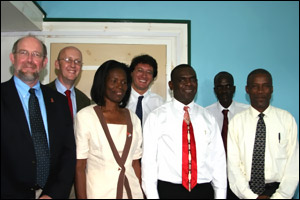 Minister of Health in the Nevis Island Administration (NIA) Hon. Hensley Daniel, said that Nevis was at a critical point in its history, in which it was still able to take preventative measures to fight HIV/AIDS from many angles.

The Minister made the comment during a one day visit by a United Nations Educational Scientific and Cultural Organization (UNESCO)-World Bank joint mission which visited Nevis on May 01, 2008. The team which comprised of Senior Programme Manager, Partnership for Child Development in London Dr. Michael Beasley; Lead Specialist, School Health, Nutrition, HIV/AIDS and Education Human Development Network in Washington Mr. Donald Bundy; Programme Manager, Education UNESCO Office for the Caribbean Mr. Paolo Fontani; St. Kitts and Nevis National Commission for UNESCO Director Mr. Antonio Maynard and Guidance Counselor Ministry of Education Mrs. Ruby Thomas, gathered data for a report which would assist the government to formulate policies, with regard to the teaching of HIV/AIDS by the education sector. They were expected to wrap up their mission on Friday May 02, 2008.

“I think that we are at a critical point in our history, where we can still do preventive measures because we do not now have a huge disease burden so far as HIV/AIDS is concerned. We have a good opportunity to strengthen partnerships, increase collaboration and cooperation to ensure that at all counts we will fight AIDS from as many angles as possible,” he said.

The Health Minister contends that education on HIV/AIDS on Nevis had to be continuous and expressed his gratitude to both international agencies for having reached and engaged a community like Nevis. He said he looked forward to their continued support and engagement.

Mr. Daniel said he was pleased to meet with representatives from both agencies and described the partnership as a new and imaginative one to address the issue of HIV/AIDS.

The Minister reiterated his position that the government had a responsibility to ensure that the young people and adults were given the appropriate measures to prevent the disease.

In that context he welcomed the partnership which he said would help the Administration’s programmes in education and health to ensure that there was a society where there was a very low prevalence of HIV/AIDS.

Mr. Bundy explained that both agencies were working with the Ministry of Education and the Ministry of Health to assist the government to strengthen the education sector’s response to HIV/AIDS.

“The education sector can go a long way to helping young people grow with great values, the right attitudes and responses so that they can remain free of HIV infection and so, they can help reduce the stigma and discrimination which prevents effective prevention,” he said.

Meantime, Mr. Beasley said during the visit to the Federation, he had been working with his colleagues to see how a process of policy development with respect to teaching of HIV/AIDS in the education sector might take place.

He explained that the team had met with a number of stake holders on both Nevis and St. Kitts to understand how subjects such as Health and Family Life and Education and also to ascertain the health status of young people and the general population at present.

“So we have been assembling lots of bits of different information to provide a good evidence base that would help a policy to be formulated. We are looking forward now to putting all that data together into a report that will be delivered to the government of Nevis and also to the government of St. Kitts.

“Then the next step would be to look at what the priorities are to develop the right policy to guide and assist the education sector, to do its very best to make sure that the young people in St. Kitts and in Nevis can remain free of HIV/AIDS for the rest of their lives,” he said.

Mr. Beasley said it was expected that most of the work would take place during the remainder of 2008. Nonetheless, he said the team was pleased with the level of encouragement it had received from the government.

“What’s been hugely encouraging from our perspective is to see the rural commitment and drive of the government here, to ensure that this process goes through well and goes through as quickly as possible so that’s been a huge encouragement for us,” he said.

While on Nevis, the team also met with Cabinet Secretary Mr. Ashley Farrell who stood in for Premier of Nevis Hon Joseph Parry.

They also met with Education Officers and Principals who according to Dr. Melvon Swanston Psychologist attached to the Department of Education shared their concerns in reference to the need for additional assistance in dealing with the disease.

He described the visit as a fruitful one and said he looked forward to further collaboration with the group as they provided services to help to alleviate some of the problems on Nevis.