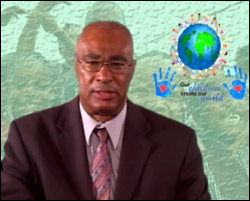 Premier and Minister of Education in the Nevis Island Administration (NIA), Hon. Joseph Parry, on June 01, 2008, officially launched the celebration of Child Month 2008, under the theme “Celebrating the present with an eye on the future.”

In a televised address at the studios of NTV Channel 8, Mr. Parry spoke of the importance of children and appealed to parents, teachers and the community to treat them well.

He used that opportunity to remind the public that teenagers were not to be left out during the month-long celebration.

“We treat our kids very well when they are a year old and five years old but I want us also to remember the 12 year olds and 13 year olds are still children and to continue to pay as much attention to them, perhaps even more attention so that they can grow up and be good young adults,” he said.

Mr. Parry also expressed satisfaction with the NIA’s continued pledge to train, value and educate the children of Nevis.

“My government will continue to work in terms of education and training to help our children and of course our adults too but our main focus is on children,” he said.

According to Mr. Parry, the NIA’s provision of books, adequate supplies for the Early Childhood Centers and its ensuring that teachers were available to teach students were indicators that the Administration recognised the importance of Nevis’ children.

In her launch of the month’s activities on Friday 30th May, she spoke of the achievements of the Early Childhood Unit.

“Our programmes continue to attract many colleagues from the Region, who have come to our shores to copy our best practices and to incorporate them in their programmes.  In fact, our Early Childhood Programme in St. Kitts and Nevis is viewed as the leading model in the Region,” Mrs. Moving said.