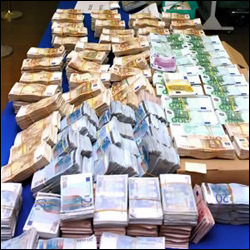 Dirty Money In The Caribbean

Lawmakers in St. Kitts and Nevis meet on Wednesday to approve legislation aimed at ensuring the Federation’s legal, law enforcement, financial and regulatory regimes are in compliance with international standards and increasing financial transparency within certain key institutions within the Federation.

The Payment System Bill establishes a comprehensive legislative framework governing the establishment, maintenance and functioning of the payment system operated by the St. Kitts-based Eastern Caribbean Central Bank (ECCB). It provides for the direct participation by the Central Bank in payment systems not operated by it including non-currency union payments systems and addresses matters relating to the designation of a funds transfer system and a settlement system including the operation of standards within such systems.

Under this law, the ECCB will be empowered to issue directives to financial institutions which appear to or are actually engaged in conduct with respect to the payment system that results in or is likely to result in systematic risk or is contrary to the public interest relative to the integrity, effectiveness, efficiency or security of the payment system.

The Financial Services Commission (Amendment) Bill increases the efficiency of the Financial Services Commission by endowing the commission with powers to impose sanctions on financial institutions that are acting in a manner that violates safe prudential practices as set out in the Proceeds of Crime Act, the Anti-money Laundering Regulations, the Anti-Terrorism Act or similar legislation.

The Bill also seeks to provide the necessary link between the Ministry of Finance and the Commission in that if more serious measures are called for, a recommendation may be made to that Ministry for the relevant business licence to be suspended or revoked.

The amendment to the Bill of Exchange Act, modernizes the principal 1887 Act with some critical provisions which set out alternative means of presenting a cheque including the possibility of electronic presentment that enables a transaction to be performed by way of electronic notification of the essential elements of the cheque.

It also introduces a section that provides for the concept of cheque certification and extends the provisions of the principal act to uncrossed cheques and similar uncrossed instruments by providing equal protection to those instruments against claims for conversion afforded to collecting banks. The extended protection applies where the instrument is accepted for collection and the payee’s account is immediately credited.

The amendment to the Anti-Terrorism Act corrects an omission in the original bill by providing for the mental element of the offence of engaging in money laundering for terrorist purposes.

While the original provision spoke to the act of committing the offence there was no provision at the time as to the particular knowledge that an accused person would have needed to possess in order to be found criminally liable.

Another amendment introduces an alternative to forfeiture where forfeiture of property seized from terrorist activities is not possible.

St. Kitts and Nevis will be evaluated by the Caribbean Financial Action Task Force “CFATF” in September.

The upcoming mutual evaluation is an attempt to determine whether the Federation is in compliance with international standards.