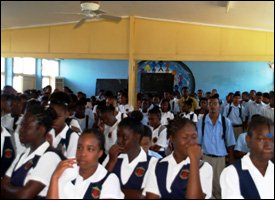 Premier of Nevis, Hon. Joseph Parry informed young people that those before them worked hard, in hopes of the advantages that they have today. He made the statement as he addressed the Charlestown Secondary School in observance of Commonwealth Day on Nevis, Monday, March 9th, 2009.

Commonwealth Day was celebrated under the theme: Serving a New Generation.

In discussing the struggles of past generations Premier Parry stated, “The hope of our forefathers was that their children would be able to get a better education, a good home, running water and electricity 24 hours a day.”  He also told the students that past generations detested working in the fields for little or no pay and that they wanted to have an independent nation where Black people could be in charge of their own destiny.

The students were reminded of the Nevisian heroes who opened the way for the advantages that are available in Nevis today. According to Premier Parry, these were people like Mr. Gordon of Gingerland, Mr. Uhral Swanston, Mr. Phinehas Griffin, Mr. Eugene Walwyn, Mr. Levi Morton and Hon. Simeon Daniel.

“These were the heroes who fought for you, to make sure you got the things that were wanted so much. Some of these men were the ones who brought the first structured government to the people of Nevis in 1983. Today, what some of you young people take for granted were not given to us, but had to be worked for,” said Premier Parry.

During the address, Premier Parry called on the young boys to try to do well in school and to try to be on par with girls academically.

“It is time for the new generation to get serious and wake up. Young men”¦ten, fifteen years from now, do you want to have your wife give you money, a car or take care of the home financially? Young men, you must want to be on the same level of your wife! So, young men, educate yourselves and take advantage of your opportunities!”

Finally, the Premier informed the students that they have to remember to respect themselves, work hard and keep in mind those who sacrificed, toiled and made it possible for them to have the many opportunities available to them today.