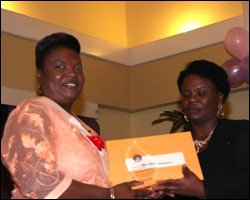 Nine outstanding teachers and seven retirees and transferees were recognized for their excellence in their field of Education on Nevis. The event was held at a ceremony at the Mt. Nevis Hotel on Saturday.

In remarks, Premier of Nevis and Minister of Education the Hon. Joseph Parry commended the teachers for their contribution to the people of Nevis.

“I want to applaud the teachers for all their hard work and for their love of teaching our young people,” he said.

During the evening’s event, Ms. Melissa Pemberton of the St. Thomas’ Pre-School was announced the winner of a scholarship from the Nevis Island Administration. The study opportunity which was granted to Ms. Pemberton will provide her the opportunity to pursue studies at a recognized University in the Caribbean.

“I am so happy that a teacher will be granted the chance to further her education compliments of the Nevis Island Administration.

“It was a great idea to have a teacher of excellence win a scholarship for study and I am pleased that Principal Education Officer, Mrs. Lornette Queeley-Connor bullied me into doing it,” said Mr. Parry.

Mrs. Connor in her turn at the podium, made the funny, yet touching comparison of how a sportsman like Nevisian cricketer, Kieron Powell would feel if a number of Nevisians were in Warner Park in St. Kitts to watch him play and he played extremely well by hitting a number of sixes.  She said, “What if after the game all the Nevisians just went to the Ferry Terminal to catch the boat back to Nevis and never said to Kieron, “job well done”?

She went on to urge the teachers to work hard even when they felt they were not appreciated for their work.

Mrs. Connor also referred to a gesture by several small businesses in Nevis that had contributed to the evening’s event which she said spoke volumes to the public.

“It tells me that our private sector is serious about education.  It also tells me that the business community realizes that the Nevis Island Administration feels strongly about its commitment to education and to the welfare of the teachers,” she said.