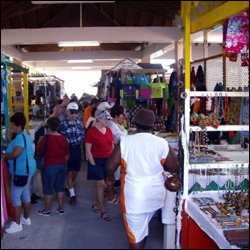 Tourists Shopping In The Amina Market
Photo By Erasmus Williams

A Florida-Caribbean Cruise Association report, not only found significant growth in passenger and crew arrivals and spending, but also a high degree of satisfaction by cruise passengers, friendliness of residents and courtesy of employees.

It said cruise tourism expenditures increased among all groups, passengers, and crew and cruise lines.

“These are certainly significant increases and were among the largest estimated among those the 29 destinations that participated in both studies. The growth in per passenger expenditures varied across categories,” said the report.

For example, during the 2005/2006 cruise year, passengers who purchased jewelry spent an average of US$144. This average purchase value increased to US$319 during the 2008/2009 cruise year. In addition the percentage of passengers purchasing jewelry also increased from 17 percent to 25 percent.

In the case of visiting crew, the sharp increase in per crew spending is primarily due to an impressive increase in the percentage of crew reporting purchases in each category.

“In the 2006 study 34 percent of crew reported making an average purchase of US$23.20 for food and beverages. This increased to 42 percent reporting an average expenditure of US$36.40 at restaurants and bars in the current study,” said the report.

Similar increases in the percentage of crew making purchases were reported in most categories.

As a result of the 250 percent increase in direct cruise tourism expenditures from the 2005/2006 cruise year for St. Kitts, the economic impacts increased as well.

Of the 1,442 cruise parties that completed the surveys 87 percent stated that this had been their first visit to St. Kitts.

Ninety-six percent (96%) of the cruise parties that completed the surveys disembarked their cruise ship to visit St. Kitts.

Of the cruise parties that went ashore, 81 percent made at least one purchase while ashore. The typical cruise party consisted of 2.1 passengers and spent an average of 4.4 hours ashore.

The responding cruise parties reported spending an average of US$162 while ashore (excludes shore excursions).

Cruise passengers were very satisfied with their overall visit to St. Kitts with a mean score of 7.8. However, the visit did not score as high in terms of meeting expectations. The mean score for “Visit Met Expectations” was lower at 7.4.

Passengers felt very informed about tours and onshore activities in St. Kitts with a mean score of 7.7.

“Guided Tours” (or Shore Excursions) received the third highest score of all visit attributes with a mean score of 8.1. Thus, cruise passengers were very satisfied with their shore excursions.

Only “variety of things to see and do” received a mean score lower than 7.0. The mean score for this category was 6.9 (Somewhat Satisfied).

Cruise passengers stated that they were somewhat likely to return to St. Kitts for a land-based vacation.