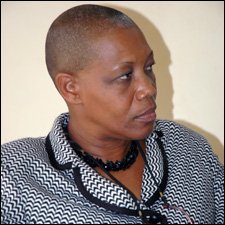 Former Speaker of the St. Kitts and Nevis National Assembly, Ms. Marcella Liburd, is advising Church organisations not to become caught up in partisan politics.

The advise following the reading of a statement from the offices of the Chamber of Industry of Commerce read by the Chairman of the opposition People’s Action Movement (PAM) and which did not reach the media until four days later. A press conference called by the Chamber, the Evangelical assiociation and the Christian Council left no one the wiser with a Chamber official refusing to disclose the name of the person who provided the opposition party official with the news release.

Speaking at a political meeting in West Farm/Boyd’s on Sunday night, the St. Kitts-born attorney said the church organisations have a role to play in the spiritual development of a nation and warned that they must not allow the agenda to be set by the politically-tainted Chamber of Industry and Commerce.

“The St. Kitts Christian Council and the St. Kitts Evangelical Association play a very important role in our country, in the community and in our lives and we don’t want to underestimate what the church does because it brings us spiritual food and it helps us to bring up our children in a very good way. We need the church as it plays a very important role in our society,” said Ms. Liburd.

She is of the view that the St. Kitts-Nevis Chamber of Industry and Commerce has a role to play and both the public and private sectors should work together for the successful development of the twin-island Federation.

Ms. Liburd pointed out that since taking office, the governing St. Kitts-Nevis Labour Party Administration, has laid the enabling environment and created the right atmosphere for business in this country because they have been very successful.

“Some of them have reported that they have done the best in their business history under Labour. Labour is a mature government that puts people and the people of the country above politics and that is why these businesses are doing very well because we recognize that the country needs the business and the public sector to work together hand in hand,” said Ms. Liburd.

She lashed out at Board members of St. Kitts-Nevis Chamber of Industry, who fail to separate politics from professionalism.

“Just as Sidney Osborne (PAM Chairman) said at the PAM Convention that he recognises the Chamber officials present and they are wearing two hats, their business hat and PAM hat. I do not have to remind you that they did not show up for Labour Party Conference, even though they were invited, clearly showing where they stood politically and this is supposed to be an organization that is supposed to be independent regardless of the preference of the people in Chamber. They must have their preference ““ it is their right, but they must behave professionally. But there are some of them on the Board who don’t how to do that and so right now the only hat they are wearing is the PAM hat and so they out there with one agenda. Despite how well they are doing under Labour, they are doing everything in their power to try to remove Labour from office,” said Ms. Liburd.

She recalled the first press conference issued by the Chamber just before the Prime Minister was about to last the Report of the Constituency Boundaries Commission Report.

“I said to the church to be careful not to allow themselves to be caught up in partisan politics because that press release that the Chamber issued that they had a moral duty and had to perform a moral duty to tell the people, that the Prime Minister should not lay the Proclamation,” said Ms. Liburd.

“The Chamber has the church embroil in this when it is the constitutional right of the Prime Minister to lay the Report if he receives such report from the Constituency Boundaries Commission,” said the local attorney.

She suggested that most if not all of these initiatives begin with the Chamber. “It is the Chamber which goes and involves the Churches and I have been warning the Churches all along, not to allow themselves to be involved in partisan politics,” said Ms. Liburd.