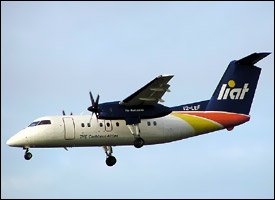 Regional airline Leeward Islands Air Transport (LIAT) received public commendation from Nevis Premier and Tourism Minister Hon. Joseph Parry for what he said was their continued commitment to the Caribbean, in particular Nevis, in the face of a sluggish world economy.

Mr. Parry made the comment while he addressed the Nevis public in a televised address on Friday on a range of issues.

He registered his thanks to the governments of Antigua and Barbuda, St. Vincent and the Grenadines and Barbados for having stuck with LIAT to the benefit of the rest of the Caribbean.

“In these hard times, LIAT has been there to serve us in the Caribbean and I want to sing the praises of LIAT and I want us to regard LIAT as a regional airline that has responsibilities to the region.

“I am especially proud as a Nevisian, to say that LIAT has been good to Nevis and LIAT has stuck with Nevis,” he said.

Mr. Parry disclosed that the airline’s Chief Executive Officer Mr. Brian Challenger and met with tourism officials on Nevis last week and gave the assurance that LIAT existing routes to and from Nevis would be maintained in the interim.

“They came to tell us is that the present flights that we have, which connects us with Antigua and St. Kitts, are to be maintained for the time being. For the next three months, the only thing they have asked of us, if there is a need, for any subside for the earlier daily flight that we will have to do it.

Mr. Parry described the meeting as a healthy one and they agreed that there was the need to promote LIAT and to encourage more people in the Caribbean to travel. Work was also necessary in the United Kingdom to enlighten the travelling public about Nevis and that LIAT provided travel connections to Virgin and the British Airways.

LIAT was founded in October 1956 and is based in St. Johns Antigua and Barbuda. It operates a frequent interisland scheduled service which serves 21 destinations in the Caribbean.