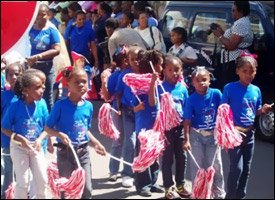 Child Month celebrations picked up momentum last Friday, June 5th, 2009 with a colorful parade of pre-school students, teachers and supervisors, through the streets of Charlestown.

Joining the cheerful bunch of youngsters and care-givers was a contingent from the Nevis Island Administration, led by Premier of Nevis and Minister of Education, the Hon. Joseph Parry, Minister of Youth, Hon. Hensley Daniel and Advisor to Education, Mrs. Christine Springette. The Ministry and Department of Education also came out in a great show of support, led by Permanent Secretary, Mr. Joseph Wiltshire and Principal Education Officer, Mrs. Lornette Queeley-Connor.

Ms. Vanta Walters, Early Childhood Coordinator, along with a group of children, parents and caregivers from St. Kitts also joined in the March which started out at the Nevis Cultural Center and culminated at Grove Park.

The theme for this year’s celebration is: 25 years of Educare, Parenting and Community Affairs.

The month of activities kicked off on Sunday, May 31st, with a packed service at the Charlestown Methodist Church. Speaking at the service, Premier Parry implored the parents in attendance to continue giving their children the support they crave even on to high school.  He noted that children who had received a strong foundation at preschool level, were usually the ones who stayed out of trouble later on in life.  The Premier also commended the large number of fathers who were in attendance and encouraged them to continue the good work of caring for their children.

Other activities in celebration of Child Month will include a Dancamasing concert to be held on Tuesday, June 9th, at the Cultural Complex, a Tea Party at the Methodist Conference Hall on June 16th and a Fun Day on June 18th.

The pre-schoolers, their parents and teachers are expected to join their counterparts in St. Kitts on Friday, June 26th, 2009 in a grand parade to culminate the month’s activities.