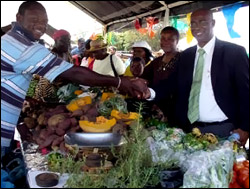 “We have to look at the cost of food and the rising cost of living in general. The government has taken steps by reducing land prices and we are also taking steps in reducing duty on a number of items; but we must grow more food and find more ways and means to reduce the cost of living,” said Premier of Nevis, the Hon. Joseph Parry.

Premier Parry made the address at the Fourteenth Annual Open Day Agricultural Fair at the Villa Grounds of the Charlestown Secondary School.  He did the honours on behalf of Minister of Agriculture, Hon Robelto Hector, who was in Japan attending to government business.

Local and Taiwanese fruits and vegetables, Caribbean Cuisine and livestock will be on display on Friday, April 25th following Thursday’s formal opening. This year’s theme is “Micro Farming: The Driving force for Agriculture: Past, Present and Future.”

The Patron this year is 95 year old Mr. George Sutton of Butlers Village,  who, in his heyday, worked as an Agricultural Officer/ Supervisor at Eden Browne, Maddens, New River, Potworks and a number of other estates around the island.

In commenting on Mr. Sutton’s longevity and lifelong commitment to hard work and honesty, Premier Parry said, “Just before I came to the microphone, I spoke to Mr. Sutton who informed me that he worked for 6 pence a day which he said, was the cost of a pound of fish.”

The Premier continued by applauding the efforts of the Nevisian stalwart, and pledged his Government’s commitment to ensure that agriculture continues to be one of the most vibrant sectors on the island.

The official opening ceremony was ably chaired by the Department’s Communications Officer, Mr. Eric Evelyn, while the national anthem was rendered on steel pan by Brendon Claxton.  The invocation was done by Pastor Eversley Pemberton, and welcome remarks were given by Director of Agriculture, Dr. Kelvin Daly.  The vote of thanks was expressed by Extension officer- Mr. Walcott James.

The Premier ended his address by thanking Permanent Secretary in Agriculture- Mr. Pearlivan Wilkin, Director of Agriculture-Dr, Kelvin Daly, Coordinator- Keithly Amory and all the extension workers at Agriculture.