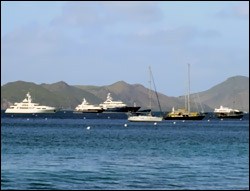 General Manager of the Nevis Air and Sea Ports Authority (NASPA) Mr. Spencer Hanley said the Authority had begun to reap benefits from the installation of 100 screw anchor type moorings, that were installed along the western coast from Oualie Beach to Gallows Bay in September 2007.

In an interview with the Department of Information on Friday April 25, 2008, Mr. Hanley said the Authority had seen a marked increase in the number of yachts to the island’s shores after three months of installation.

“We installed 100 moorings of the screw anchor type and the completion of the installation was in September last year and yes we want to say that it has been a success up until this point,” he said.

According to the Authority’s General Manager, the idea behind the installation of the moorings was to attract yachts to Nevis and to provide protection to the marine environment, since the island did not have the facility of a marina. He explained that when ships dropped anchor they ploughed the sea bed and damaged the coral and habitat and therefore wanted to do some damage control.

Notwithstanding, Mr. Hanley said the Authority’s aggressive marketing, overseas was responsible for the recent boost in the number of yachts to the island’s shores. He noted that the next move would be to a prestigious sailing event in Antigua this weekend, where he would make a sales pitch in an effort to encourage more yachts to Nevis.

“We will be attending the Stanford Sailing week. It is a very, very prestigious event. This year is the 41st anniversary of that event and what we are hoping to achieve by attending, we want to encourage the yacht people to come to Nevis after a vigorous week of sailing in Antigua. Nevis will have exactly what they want a little relaxation and recreation.

“Many of these yachts sail by, they are going past Nevis on their way back or even on their way to Antigua, so we are going to Antigua to make a sales pitch for that.
We have taken out a full page advertisement in the present sailing week magazine it is there for all to see that we mean business. At NASPA we intend to really and truly establish Nevis as a yacht facility, yacht tourism is the way to go and we intend to make that happen,” he said.

In response to a question with regard to patrols, Mr. Hanley explained that the Authority was actively in the process of acquiring a 12 foot rubber dingy to help them zip in and out to conduct patrols. Nonetheless, he said monetary wise it has been good.

“In the height of the season sometimes we are upwards of $10, 000 a month including all the fees pertaining to yachting. So it has not been bad, we definitely have seen an increase in the revenue as a result of this endeavour.

“We have three classes of fees if your boat is in the 0-35 foot range then there is a fee for that, if your boat is from the 36-60 range there is a higher fee and if it is in the 61 -90 range there is a higher fee. The moorings are designed to facilitate vessels up to 90 feet but there are many, many yachts that exceed 90 feet those mega, mega yachts and so we have designated a safe area where they can drop anchor, where we don’t have any coral or habitat damage concerns,” he said.

Under the moorings installation project, the Authority also installed 50 swim buoys on Pinneys Beach that were intended to create a safe swimming in which the public could enjoy the waters without fear that a pleasure craft would be in the way.