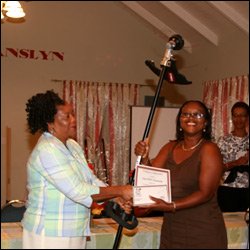 Pond Hill Village placed first in the 25th Anniversary Best Village Beautification contest. The announcement was made by Mrs. Isabel Byron of the Nevis Historical and Conservation Society (NHCS) during an awards ceremony on October 1, at the Red Cross conference room, Charlestown.  Barnes Ghaut and Cotton Ground Villages placed second and third respectively.

Minister of Social Transformation and Health on Nevis Hon Hensley Daniel, thanked the communities who participated in the contest for having rekindled the community spirit on Nevis.

“I am indeed pleased with the response to the community day activities. As I have said repeatedly, the aesthetic value of the island informs the tourism sector from which most our resources flow,” he said.

He explained that the village clean up was an attempt to get the community to take pride in its immediate surroundings and announced the Ministry of Community Development’s intention to make the contest and annual event.

Mr. Daniel described the contest as one which had breathed new life into the community and called for its sustained momentum through organized social community activities, which would bring the community together.

“These activities bring a sense of belonging, a sense of identity. It is an attempt t break the trend in which men and women are segregated into narrow routines and milieux”¦We get to learn more about the structure of the community and our role within it.

“It is intended to prevent people from being trapped in a confining circle. It aims to abolish remoteness and create warmth as people work together,” he said.

The project combined outside assistance with local self determination and effort. Initially 23 villages signed up for the project but only 11 participated. They were Camps/Liburd Hill and Barnaby, Mount Lilly, Fountain, Cotton Ground, Barnes Ghaut, Jessups, Bath, Pond Hill, Market Shop, Zion and Butlers.

All the villages who participated in the contest received cleaning implements.