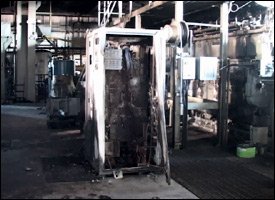 St. Kitts was plunged into darkness in the wee hours of Thursday morning when fire damaged two of the nine generators at the island’s lone power station.

Minister of Public Utilities, Dr. the Hon. Earl Asim Martin said a thorough investigation would be conducted to determine the cost of the damage and the exact cause of the fire, which started around 3:45 A.M.

Police and Fire and Rescue personnel arrived on the scene within minutes and the situation was brought under control.

He said an assessment has been carried out on all remaining generators that were taken offline for safety reasons during the fire so that they can be brought back online at the earliest possible time.

He said load shedding will have to be implemented as the supply of electricity to thousands of consumers and businesses has been affected.

“The normal demand for electricity during peak periods is approximately 24 mega watts, and during off-peak hours is approximately 15 mega watts. Subsequent to the fire, 15.9 mega watts is currently being generated leaving a deficit of 8.1 mega watts,” said Minister Martin, who disclosed that nine generators were also offline for regular maintenance prior to the fire which started around 3:45 A.M.

He said also that  one of the generators that was offline for maintenance will be re-commissioned on Monday 6 October, 2008 therefore providing an additional 4.4 mega watts at that time, bringing total capacity up to 20.3 mega watts.

“There is to be final commissioning work on Caterpillar #1, which if our assessment is right, should be completed by Monday, the 6th of October. This engine moving back on the system will depend on our acceptance after commissioning is done. The engineer working on that engine is expected to be on the island at 2pm this (Thursday) afternoon,” said Channer.

He said that based on a preliminary investigation an attempt is being made currently, to provide a temporary control mechanism to facilitate the return of the 8MB 430 engine and an engineer was arriving Thursday afternoon to assist with that task.

“Also based on preliminary investigation, the Mirrlees 12MB 430 is expected to be out of commission for some time. We cannot yet say how long. Due to the circumstances regarding the Mirrlees 12 MB 430 the Government is now exploring the possibility of getting standby generators in terms of renting,” said Channer at the Press Conference.

Two staff members were treated at the Joseph N. France General Hospital for smoke inhalation and have since been discharged.