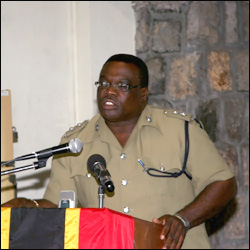 The Senior Police Officer made the disclosure on Thursday at the second Symposium on Crime hosted by the Premier’s Ministry in the Nevis Island Administration under the theme “Reclaiming our Society”. The forum was held at the Red Cross Building in Charlestown. The first Symposium on Crime was held in May 2010.

He explained that the Strategic Planning Group, a key ingredient in the effective management of the Division’s resources had built a sense of teamwork there. The Group recognised that the moral of the men and women stationed at the Division was critical importance to its success and instituted the Annual Appreciation Awards ceremony which has kept the officers focused on the job.

Mr. Brandy said the Division had increased foot and mobile police visibility; increased public awareness in the prevention of burglary and housebreaking; increased community policing programmes;  began working in partnership with other law enforcement agencies; reintroduced the School Liaison Programme; increased surveillance at the ports of entry and worked with the Customs Department to patrol the vulnerable cost line; promoted drug and gang resistance awareness in the schools  and among community groups with assistance from Mr. Dan Mcmullin and Operation Future and developed drugs, firearms and gang intelligence and targeted offenders.

In response to a question from Premier of Nevis and Minister responsible for Security Hon. Joseph Parry with regard to zero murders on the island for 2011 so far, Inspector Brandy said intelligence was a factor.

“It is as a result of our intelligence and targeting offenders we have been successful for the year so far. We continue to train our officers and just last month four of our officers received crime scene management training from the Federal Police of the United States of America which was held in Basseterre St. Kitts,” he said.

Murder, Burglary and Drug related offences had increased on Nevis in 2010 over 2009 Inspector Brandy said and between January 2008 and December 2010 there were 1054 reported Breaking offences, which accounted for the majority of crimes committed.

The Head of the Nevis Police Division said their detection showed that the offences were committed by males between the ages of 15-30 years. They were usually school drop outs, unemployed, products of broken homes or poor parenting and members of gangs.

“Our interviews with these offenders reveal that their motive for the offences has to do with the need for cash to maintain or sustain themselves and their drug habit.

Mr. Brandy noted that his most recent check of the prison population for inmates from Nevis revealed 42 males and almost 88 percent were below 30 years of age.

He said that statistic suggested that Nevis was already losing a generation of young men to criminal activity and listed some long and short term solutions that were simple goals which could lead to solutions for reclaiming the society.

“Teach our young men to read by the second grade and to embrace education; provide positive role models for our boys; create a stable home environment that includes contact with their father or a suitable father figure; ensure that our boys/young men have a spiritual base; control the negative media influences on our boys/young men and teach our boy/young men to respect females and especially the elderly.

“In the long term, invest as much money in educating our boys which in the long run will benefit our community instead of having them incarcerated; teach our boys self discipline, culture and history; teach our boys and the communities in which they live to embrace education and lifelong learning and create job opportunities for our young people,” he said.

The Inspector quoted author Mr. Frederick Douglass who said it was easier to build strong children than to repair broken men and contended that the prevention of crime and building of a strong society had to start with children and young people. He said it would help to reclaim the society and build a better framework for a future society.