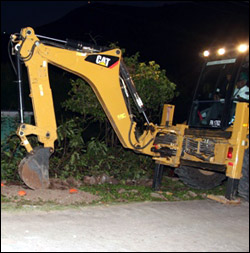 The Joseph Parry Administration continued to positively impact the lives of the people of Nevis as residents of Cox and surrounding areas, will be outfitted with an improved network of village roads.

Area representative for  St. Johns Constituency and Minister of Social Transformation and Community Development the Hon. Hensley Daniel who is also a resident of Cox, had the honor to break ground to signal the official start of the project. The ceremony took place at the Gazebo in Cox on Wednesday April 16, 2008.

Minister Daniel said the construction of the road from Pancho to Chicken Stone was vital to the delivery of goods and services and would decrease the cost of vehicle maintenance.

He pointed out that no major road improvement, road construction or repairs had taken place in these areas for the last 30 years and it was an opportune time to do a total road rehabilitation.

“We are persuaded that people want proper roads so that they can go about their daily lives without too much difficulty.  I am aware that people have lost new shoes as a result of bad road.  Some areas have been avoided because of poor roads.  It is impossible to conceive development without the construction and maintenance of roads.  Indeed the road to development is the development of roads.

“The new government with all of us working together, has ensured that roads become a reality”¦.Roads are essential for diversion, for security reasons, for avoiding congestion and facilitate the people, goods and services.  Road construction goes hand in had with economic growth.  Further economic growth demands investments in road,” Social Transformation Minister Daniel said.

He highlighted that property values would rise because of the enhanced roads and the aesthetic presentation of the surrounding villages would be improved.  He also took the opportunity to call on fellow residents to corporate fully with the workmen on the project.

Minister Daniel who has only been in government for the past 21 months, received much commendation from his constituents for having delivered on his campaign promise to ensure that they were taken care of and for bringing the project to fruition.

Meantime, Minister of Communication, Works and Public Utilities, the Hon. Carlisle Powell joined in saluting his colleague Minister Daniel.  He told the residents that the Nevis Reformation Party [NRP] government had come to fulfill another campaign promise to make life better for all Nevisians.

“You the good people of Cox and the surrounding areas have waited patiently for your turn. Your patience is justly rewarded! Your time has come,” Minister Powell said.

The National Piling Company led by Mr. Joshi had been contracted to construct the 3.5 miles of road and would also provide financing of 15.9 million dollars at a concessionary rate.

Premier of Nevis also addressed the residents at the symbolic ceremony chaired by Cox resident and Permanent Secretary in the Ministry of Social Transformation and Community Development Mr. Alsted Pemberton. Also in attendance were members of the Nevis Island Administration, residents of Cox and the surrounding villages and specially invited guests.

The ceremony showcased cultural performances from the I-Afrikana drummers accompanied by fifer Santoy Barrett, young Shawvan Mills and a dance group from the St. Johns Primary School.  A vote of thanks was given by Miss Paula Griffin.