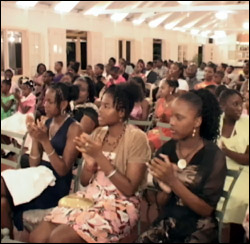 A two-day leadership workshop for students organised by the Department of Education in the Nevis Island Administration (NIA) held under the theme “Empowering our Youth for Future Leadership”, culminated on April 16, 2008, with a cocktail reception which was held at the Old Manner Hotel in Gingerland.

Through the courtesy of Premier of Nevis and Minister of Education Hon. Joseph Parry, the cocktail was held in honor of both Primary and Secondary School’s Student body Councils. Mr. Parry told the young leaders he had enjoyed the discussion he had with them as one of the workshop’s facilitators.

Premier Parry disclosed that he was pleased the future leaders were motivated to attend the two-day leadership course and more importantly, he hoped they had learnt numerous things that would make a difference in their lives and therefore would encourage them to pursue good leadership through positive reinforcement.

“I hope all of you will continue to be friends and that this group of young people will never forget each other. I want you to form a [human] ring around the island and understand we are one people and if you demonstrate this, you would help to remove the negative things that are taking place in our society,” the Premier said.

He congratulated the students for having earned their certificates and the facilitators, school principals and teacher liaisons and commended parents who supported their children.

As one of the facilitator’s for the workshop, Mr. Parry discussed with the students the differences between reality and perception and how they both worked together to help them take decisive action as leaders and other personal situations that would happen in their lives.

Mr. Parry impressed upon the students about the importance of good listening skills which he explained was weakness in society.

“How many of you have been in a class and you’re looking at the teacher and your mind is somewhere else. You have to learn the art of listening and understanding and if you understood what perception and reality were, it would help you to better understand what’s taking place, which makes it is easier to take action,” he said.

Among the young leaders at the evening’s event were Education Officials, liaison teachers and parents.

Education Consultant Dr. Bronte Gonsalves recapped how the student leaders responded to various topics dealt with at the workshop. She first reviewed how Nevis’ Public Schools were more advanced with regards to student Council government compared to other schools in the Organisation of East Caribbean States (OECS).

“We are very proud to be the only country in the OECS with Students Councils in every government schools primary and secondary. We had a contingent of high school students participating in the workshop and observing what is happening because the education regulations now mandate that their must be a federal student council association but unfortunately although we had very effective students councils since 2002 in Nevis there isn’t one in any school in St. Kitts yet.

“So they were very anxious to see what we do and how we do it. Mrs. Hodge[Principal Education Officer on Nevis] recently was asked to report as to why it is that in Nevis we were able to develop successful councils and sustained them. So they rest of the region now looks to Nevis for sharing best practices,” she said.

Dr. Gonsalves attributed the OECS interest to student’s enthusiasm in Nevis’ future leaders, liaison teaches and Principals who worked hard to sustained the Student Councils in their respective schools. She also credited parent who supported their children.

The Students were also complemented on how well they prepared for Student Council elections and how they integrated technology into their posters, and prepared their portfolios, which included printed business cards.

The future leaders were successful with school projects which ranged from refurbished bathrooms, tiled classrooms, organised debates, the establishment of a School Newsletter and their assistance to Principals with school business.

They were also trained how to manage their different offices and studied their Student Council Constitution. Also they developed programmes and mentored other students. However, although the students were successful, the workshop focused on helping students to develop their leadership skills.

During the session with Reality and Perception, gang warfare, respect and honesty, morality and sexual behaviour were some of the major concerns discussed.

Under Protocol, the young leaders created skits and used scenarios which they gained exposure from visiting the Premier’s office. They were taught how to address his secreatary, how the secreatary addressed the Premier, how to administer a proper handshake and how to address various dignitaries.

Dr. Gonsalves indicated that Anger Management and Conflict Resolution were popular topics among the students.

“Our children are very wise and perceptive and they are also aware what they could do, what to walk away from and what to count to 10 before they react, alternate to slapping someone or pushing someone.

“They left that session with a theme “˜I’d rather be a mama’s boy in my home, than a big man lying in a prison,’ but also they took away with them, that the reason for what is happening in our society today is a direct result in not being able to engage in conflict resolution, not being able to settle problems,” she said.

The session on Projects she said was very educational for the students. The students discussed issues such as assessing projects and setting goals. The students requested for that type of intervention to be annual due to the interest that it generated among the young leaders.