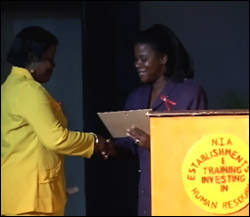 Minister with responsibility for Social Transformation on Nevis Hon. Hensley Daniel, issued a call to mothers on Nevis to continue to influence the course of development on the island.

The Minister’s advice came from a message delivered on his behalf by Legal Advisor in the Nevis Island Administration (NIA) Mr. Patrice Nisbett, at a Pre Mothers Day Celebration and Commendation Exercise of Exemplary Caregivers of Mothers in Nevis. The event which honoured 55 caregivers was a Gender Affairs Unit initiative, sheld on April, 27, 2008, at the Cultural Centre in Charlestown.

“Mothers, continue to influence the course of development in Nevis“¦This country will never be able to pay its mothers neither in cash nor in kind for the work they have done in building the nation and shaping the society.

“Given the importance of appreciation in psychosocial development, we appreciate the mothers and caregivers to enjoy long and fulfilling years,” he said.

Mr. Daniel referred to the caregivers as persons who were called to care; who put themselves on the side of duty other than on the side of comfort and convenience and who had served the current age. He said they were fulfilling their calling and had engaged all their powers to do their Master’s will.

He acknowledged that the celebration took place at a time when the values taught by mothers was under threat and maybe the time had come for a return to the traditional methods of mothering that were marked by discipline, respect, hard work and good manners.

“I believe many of the caregivers and many mothers are deeply troubled by the erosion of these values. I am sure that they want to remind the society that these values are for all times.

“I want to suggest to all of us that when we disregard these values, we devalue the importance of mothers. Good parenting is synonymous with those values,” he said.

The Minister with responsibility for Social Transformation described a mother as a child’s first teacher therefore it behooved all mothers to teach children well.

He said the Apostle Paul admonished parents to bring children up in the fear and admonition of the Lord but it should be born in mind that when mothers caused children to stumble, they were visited with God’s wrath.

Mr. Daniel also admonished mothers to help children to learn to read at an early age and cited that children who developed a love for reading at an early age were less likely to get involved in crime, violence and drug abuse.

He further referred to them as the corner stone of the family and society and noted that it was a national disgrace when fathers did not maintain their children.

“The spectacle of mothers having to go to the Court to get financial support for their children represents the worst elements of society. It is a terrible lack of concern and disregard for mothers.

“Given the speed with which we move to bring about social justice, I believe that you expect to bring legislation to Parliament to allow for the compulsory deduction of monies from the salaries and wages of delinquent fathers. The non-maintenance of children has led to social decay, crime, violence, drug abuse, promiscuity and low self esteem,” he said.

The Minister associated the celebration of Mothers with single mothers who he said have carried a usually heavy load.

“It is still true that one hand cannot clap. These single hands have been clapping ““ They have been feeding, clothing and raising children on their own for far too long. About 46 percent of all households in Nevis are headed by single women. Perhaps we need to promote the institution of parenting as a skill so that more people would benefit from parent education programmes”¦

Director of the Social Services Department Ms. Sandra Maynard in remarks publicly acknowledged Gender Affairs Officer Mrs. Oslyn Griffin-Kelly who had thought of the idea for the celebration.

“She [Mrs. Kelly] feels as we all do at the Department that their task is a noble one , they should be praised publicly for their dedication to the  daily task of caring for and providing companionship to their mothers.

“This is not always an easy task it takes patience, strength, love and a gratitude that is often missing in some children who do not give back in their parent’s later life, despite how much they have sacrificed for them when they were children,” she said.

She pointed to the dedication and sacrifices of mothers and urged persons to foster a responsibility to care for their parents after they have done so much. Ms. Maynard also commended the honorees and said she was hopeful that the celebration of their dedication and selflessness would be a blessing to them.

The honorees were presented with certificates of appreciation by Mrs. Eileen Walwyn and Mrs. Sandra Flemming. The programme which was chaired by Mrs. Griffin Kelly was dotted with performances from the Nevis Boys Choir and Dr. Raymond Rohan, Xaltation among others.