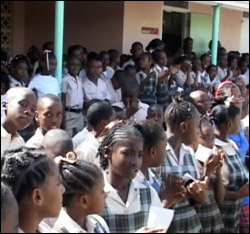 Congratulatory remarks of well wishes and continued academic and athletics success were conferred upon the staff, students and parents of the Charlestown Primary school by area Representative for Charlestown Hon. Robelto Hector. He expressed the sentiments during the school’s special Devotions held in honor of its 16th anniversary, which was celebrated on Monday 28, April 2008.

He articulated for students to maintain the team effort which Principle Mrs. Alice Swanston attributed to the school’s success and to embark on setting academic goals in order to emerge as high achievers.

He impressed upon all those who attended the devotion, to remember those persons who had contributed to the school’s success.

“It is a time that we all should be proud of. It’s a day that we should reflect on those who contributed to this school and we must thank them for their contribution.  Throughout the day students, I want you to each take a little time and say to your teacher “˜thanks for the great things you have done for this school and for you’,” Mr. Hector said.

On hand to participate in the celebration was Chief Principle Officer Mrs. Jennifer Hodge who acknowledged Mrs. Swanston for her 16 years as Principle of the school. She further added that her demonstrated qualities were unflappable and a determined individual.

“I want this morning to say to you Mrs. Swanston that you have done a fantastic job. Mrs. Swanston is one of the most hardworking persons I have known and with the support of her staff, once she set her mind on a goal, that goal must be accomplished

“I would like to acknowledge Mrs. Swanston and members of the staff for their incredible input into the development of the Charlestown Primary School. Without the concerted effort of everyone, you could not have reached where you are today,” Mrs. Hodge said.

Students were however encouraged to expand on the many opportunities offered at their school.  They were reminded of the school’s record of excellence during its 16-year life span, which the Chief Education Officer said came through student’s hard work and determination in academics, sports and core curricular activities.

Mrs. Hodge explained to students the importance of exhibiting good mannerisms at school and in the community, which she said would help to propel them to the next level. More importantly, The Chief Education Officer reminded the student fraternity to focus on their academics as the new term began, in order to maintain the schools excellence.

Meantime, the School Principle gave an overview of the school’s week of planned activities. The celebrations started with Special Devotions on April 28, at the school’s premises. On Wednesday April 29, would be the school’s Star Search elimination. Wednesday April 30, the Principle and Staff would conduct a classroom exchange which would give them the opportunity to experience teaching other grades for the day. Thursday, May 01, would be recognised as T-shirt Day, followed by a concert in the evening at 6:00pm. This would give students the opportunity to showcase their talents in poetry, dance, songs and modeling. Trophies would also be awarded to students on Thursday evening and Friday May 02, would be the school’s Fun Day.

Mrs. Swanston requested the Public’s support, for the school’s week of activities, in honor of its 16 years of dedicated service to the community.