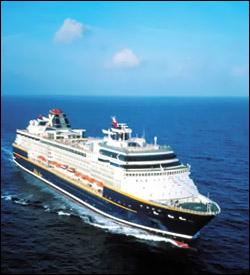 Two of Celebrity Cruises newest ships are to visit St. Kitts – Nevis when they are inaugurated later this year and next year.

The 2,850-passenger Celebrity Solstice, which will be launched in December this year, will sail seven-night Eastern Caribbean cruises round-trip out of Fort Lauderdale, Florida.

The Celebrity Equinox, which is to be inaugurated in August 2009 will sail 10 and 11-night “Ultimate Caribbean” cruises round-trip out of Fort Lauderdale, Florida.

Two Celebrity ships, the 2,281-passenger Galaxy and the 2,450-passenger Constellation made several scheduled calls to St. Kitts – Nevis during the 2007/2008 Season.

Celebrity Cruises said Caribbean cruise enthusiasts will have something to celebrate late 2009 and early 2010 as it will be the first time in five years, that it will be offering a range of Caribbean itineraries lasting a week or longer on five of its ships, the Celebrity Constellation, Celebrity Equinox, Celebrity Mercury, Celebrity Solstice, and Celebrity Summit.

Together, the ships will call at 26 different ports during sailings ranging from seven to 14 nights, departing from Fort Lauderdale, Florida, and San Juan, Puerto Rico.

Celebrity’s current fleet will be joined by the Celebrity Eclipse in 2010, and a fourth Solstice-class ship in 2011.

The 2007/2008 Cruise Ship Season is set to be the best ever in the history of the industry with the expected visit of over 400,000 cruise passengers.

The World Travel & Tourism Council is forecasting that within the Caribbean, St. Kitts and Nevis is forecast to register a 5.6 percent growth rate , the second highest in the region.