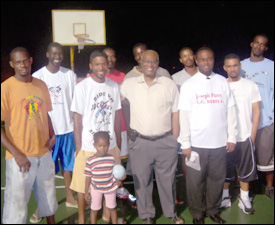 Director of Sports on the island of Nevis Mr. Lincoln Barry has announced that Nevis will be hosting Game 3 of the LIME SKABA Finals between the Joseph Parry Cotton Ground Rebels and the Rams Hitters.

In a release dated October 14th Barry said “I have  been in touch with the President of SKABA Mr. James Ã¢â‚¬ËœBarman’ Hanley and plans are presently afoot to host the third match of the finals in Nevis.” The Director of Sports in the NIA continued “Work will commence immediately to prepare the court at the Grell Hull-Stevens Netball Complex for the encounter.  He is inviting the whole of Nevis to show their support for the history making team as the Rebels seek to establish themselves at the top of  basketball team in the Federation.”

Barry also indicated that arrangements had been made for  a boat charter to St.Kitts on  Sunday 17th October when the CG Rebels will engage the Hitters in the first of the best of five finals.  According to Barry, the Caribe Queen will leave the Charlestown pier at 6pm and return to Nevis one half hour after the final match of the evening.  Passengers will pay $50.00 round trip and this fare will include a free pass into the Basketball City.

During a practice session on Wednseday evening the team was visited by sponsor Premier Hon. Joseph Parry who deleivered some words of encouragement to the team and further pledged his support to the Nevis champions.

The Leader of the Nevis NIA NRP administration said “I am very proud of you”¦I know that you are the best team in Nevis but I never knew that yyou had done so well in the St.Kitts league”, stated the Premier.  “I know that you can do it””and you are going to do it.&  Let me be a little parochial here””only Cotton Ground can do iit like this”.

The Premier continued  “I won’t be here this time as I will be away on Government business but when I come back, we will have a big party in Cotton Ground””we will still have the party but I wannt it to be because you are the champion Basketball team in St.Kitts and Nevis.”

Cotton Ground Rebels made history when they became the first Nevisian team to make it to the SKABA National Basketball Title. The team will be engaged in a 5 game series beginning on Sunday at Basketball City, St.Kitts.