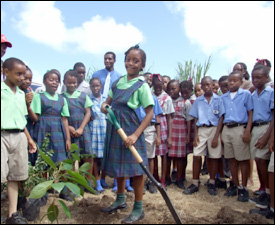 One hundred and ten trees were planted along the island main road as the week of activities commemorating the October 16th observance of World Food Day continues in St. Kitts and Nevis.

A brief ceremony, held on Thursday morning (October 14) in the community of Bourryeau, symbolically marked the occasion. Senior Minister and Minister responsible for Agriculture, Honourable Dr. Timothy Harris and officials from the Agricultural Department were joined by residents from the surrounding villages to plant the Almond, Cherry, Sour sop and Tamarind trees. Drumstick plants were also included.

Agronomist Paul Benjamin coordinated the local activities being celebrated under the World Food Day theme: “United Against Hunger.”  He reported to SKNIS the rationale for the fruit tree planting exercise in open locations from Cayon to Mansion.

“One of the ways we can unite against hunger is to have more food on the landscape and so we thought of having trees not just on the farms alone but on the main road,” he explained. “As people pass along the main road they can have fruits to pick and they can eat food and we can [better] ensure food security in our Nation.”

The ceremony was also witnessed by various crop and livestock farmers, members of social clubs and community institutions as well as faculty and students from the Violet-Petty, Joshua Obadiah Williams and Edgar T. Morris primary schools.

Director of Agriculture, Ashton Stanley welcomed the younger children in particular and encouraged them to care for the trees as they would be the ones to benefit when the fruits are produced in a few years.

Senior Minister Harris encouraged the students to enrich their daily consumption with fruits and vegetables, which are critical components in the recently unveiled Food Based Dietary Guidelines (FBDG) for St. Kitts and Nevis.

“An apple a day, keeps the doctor away, but so too will morocco, and mangoes and oranges and shaddocks, sour sops and bananas. All the fruits that you can get and all the vegetables that you can eat fresh, we want you to do so,” he stressed, while also appealing to farmers to keep prices reasonable so local produce will be the preference of shoppers.

The Minister added that while many consider agricultural production to be back breaking work it is playing a dual role in the fight to end hunger as it creates food to be consumed and generates income to purchase tools and other resources that can be used to sustain families and expand output.

The week of activities continues on Friday with the Annual Farmers and Fishers Prize-Giving Ceremony, which was integrated into the Farmer’s Market to be held in Independence Square.